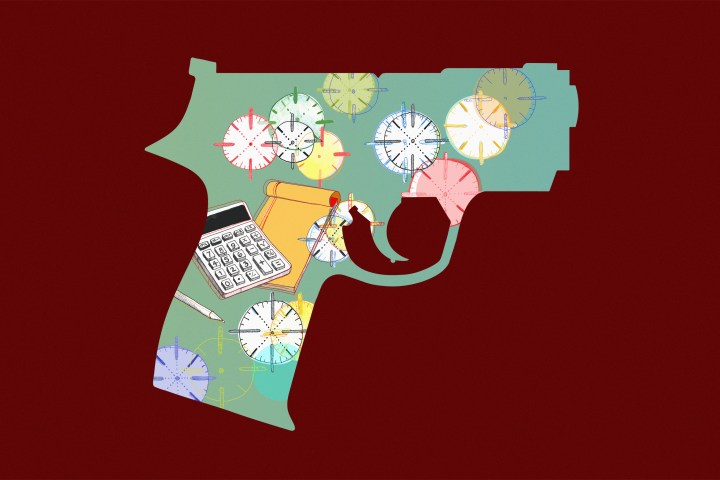 Of all the things you worry about at work each day, what will happen if you are shot is probably not one of them. For Paul Marshall, it’s a little different.

Marshall is concerned about paying for everything that follows a shooting: the medical bills, the funeral costs, the counseling. As the director of active shooter and workplace violence programs at McGowan Program Administrators, it’s his job to make your employer worry about it, too, and sign up for workplace violence insurance coverage.

“I started the program three years ago. And the main focus of the program is to answer the question: Who will help the victims?” said Marshall.

General liability insurance coverage does not kick in unless the company where shooting took place is sued and found liable for the incident, or the person who perpetrated the attack is. According to the experts interviewed by Marketplace, lawsuits like this can take years and companies are typically found to be not responsible for the costs resulting from the incident.

To meet the costs in the immediate aftermath of mass shootings, victims and their families often turn to crowdfunding platforms such as GoFundMe. After a lone gunman killed 58 people in Las Vegas last year and injured more than 500 others, a GoFundMe campaign raised about $31.5 million for the victims.

“Most of the shootings, there is no GoFundMe account, because there’s no public attention,” said Marshall. He says that’s where the active shooter insurance coverage comes in. It’s a financial resource that can be used as soon as a shooting takes place.

Besides covering costs such as medical bills, funeral costs and counseling, it also includes business interruption and loss of income insurance; all of which appeal to companies concerned about workplace violence.

In 2017, 351 people were shot dead intentionally at work by another person, according to the Bureau of Labor Statistics. The year prior, it was 394 and the year before that, 354. If you work full time, you spend about 261 days a year at work. That means more than one person was shot each workday.

One shooting per day might not seem so high in a country where almost 157 million people report to work daily, but to employers who watch the news, the probability of a workplace shooting appears higher than ever.

When a workplace shooting takes place, Marshall’s phone rings more than usual. After the June 2018 shooting at the Capital Gazette in Maryland left five dead and two injured, six newspapers across the country signed up for active shooter coverage, he said.

“A lot of it is reactionary,” Marshall explained. “Unfortunately, when people feel victimized, that’s their motivation. They feel they need to do something because — whether it be a yoga studio or cinema or a news organization — if something were to happen on their premises, they would want to be able to respond immediately. And that’s why people are buying this coverage.”

People assume that it’s mostly schools that are purchasing active shooter coverage, but schools account for just 30% of Marshall’s clients. Currently, he has more than 500 insurants, including law firms, car dealerships, daycare centers, coffee shops and small restaurants. A number of his clients have already made use of the coverage, including a school where a Friday night football game was interrupted by a shooting.

“Everyone could potentially be a victim to this, and that’s why we’ve made this product affordable for everybody,” said Marshall. The insurance premium starts at $1,200 a year.

“In the event that they cannot use [their] building due to a mass shooting, we will basically work with them and either build a memorial, refurbish, or tear down and rebuild,” he explained.

Pulse Nightclub, where 49 people were killed and 68 were injured, was turned into a memorial and a museum. Sandy Hook and Parkland, both of which were scenes to some of the deadliest school shootings in the U.S., have chosen to tear down and rebuild their buildings. The new Sandy Hook school cost about $50 million.

It’s benefits like this, as well as crisis management and counseling services, that often end up being key selling points for companies, according to Jack Schwartz, a risk management consultant at Custom House Risk Advisors. As a consultant, Schwartz doesn’t sell insurance, but provides insurance-related advice to companies.

When it comes to active shooter insurance, Schwartz counts himself among the skeptics and says most brokers are using such policies to attract new clients.

“Active shooter insurance has become a very popular thing and many brokers are going out and trying to sell it to their clients. And it sounds like a good idea and it makes a lot of sense because of today’s society, and the nature of what’s going on in the world,” he said.

“But if you look deeper into it and if you understand insurance, it may not be as good as it sounds, so to speak.”

In most cases for full general liability coverage to kick in there has to be “some sort of legal summons, complaint, lawyer letter” to trigger it. But these general liability policies also include medical expense coverage, between $5,000 and $20,000, that can be accessed as soon as possible.

Schwartz warned against purchasing two possibly conflicting insurance policies, both of which could claim that the other insurance policy has to pay first.

“You’re going to have to wait for them to battle that out. And you don’t want that. You want to just get paid when you have a claim,” he said. One way to avoid that might be to have one carrier state in their policy that they will provide primary coverage.

However, according to Schwartz, it might not be long before general liability policies begin to expand their coverage to offer the kind of coverage currently available only under active shooter policies.

Until then, Paul Marshall will keep doing his job.