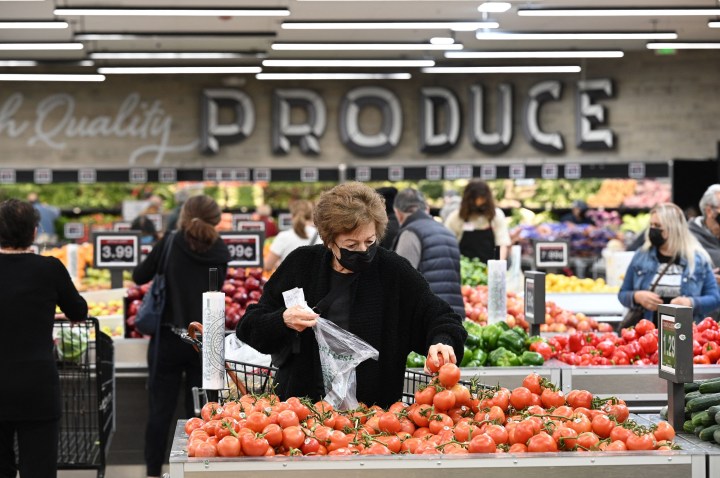 People shop for groceries at a supermarket in Glendale, California. While grocery stores generally have thin profit margins, they tend to make up for it in volume. Robyn Beck/AFP via Getty Images
I've Always Wondered ...

People shop for groceries at a supermarket in Glendale, California. While grocery stores generally have thin profit margins, they tend to make up for it in volume. Robyn Beck/AFP via Getty Images

Grocery stores always complain of the business having “incredibly thin” margins. Sometimes they quote 2 or 3 percent. If this is true, why would anyone be in the grocery business, when over the long run stocks and bonds beat that. And without the effort and potential liability? Something doesn’t add up. Ideas?

Overall, a grocery store’s profit margins are roughly 1% to 3%, but those numbers don’t tell the full story.

There are other financial metrics to take into consideration, said Peter Zaleski, an economics professor at Villanova University.

He gave this example: Let’s say you buy a grocery store that costs $5 million, and you purchase it as if you’re buying a home. You’ll make a 20% down payment by investing $1 million and borrowing the rest.

“That sounds a little bit better. But it’s still not making us excited,” he said. “Except remember: We didn’t invest $5 million, we only invested a million. So on our million-dollar investment, it’s a 15% rate of return.”

So, he added, there are three rates of return to pay attention to: There’s a profit percentage that’s a return on those sales — 1% in the example above. Then there’s a return on the asset (3%) and the return on equity (15%).

And don’t forget, grocery stores are selling a ton of items, especially produce.

“Sure, we’re only making 1% profit, but it’s worth our while to be in this business because we make it up in volume,” Zaleski said.

As another example, take one of the world’s biggest fast-food franchises: McDonald’s.

“McDonald’s doesn’t make that much money on every burger, but it sells billions of them,” said Shivaram Rajgopal, an accounting and auditing professor at Columbia Business School.

Meanwhile, he explained, a fancy French restaurant has a higher markup because it’s “selling you a lot of expensive wines and fancy food,” but turnover is low because customers may spend hours there.

One of the advantages of being in the grocery business is that you’re selling necessities and you have returning customers, Zaleski explained.

Some wholesale stores, like Costco, have an army of devotees who have created Instagram and TikTok accounts touting the deals you can score there.

Noor Abdel-Samed, a managing director at L.E.K. Consulting, pointed out that Costco reported $1.3 billion in earnings last quarter on $52 billion of revenue. That amounts to a 2.5% net profit margin, or return on sales.

“That’s perfectly fine, it’s healthy. If you try to boost that too much by raising prices, then people stop shopping. If it gets too low, then you don’t have any cash to throw around to invest in new locations,” Abdel-Samed said. “So it’s all carefully calibrated to remain competitive versus other people, but also to be able to sustain operations and drive enough profitability to continue and grow.”

Abdel-Samed said a grocery store’s initial margin might be 20%, but then you have to pay your corporate executives, along with labor and shipping costs.

Grocery store success starts with having the right products and adapting them for the type of location you’re in, he explained. For example, if you’re in rural Georgia, he said it makes sense to stock bigger products. Since people have to drive to reach the store, they can load these larger items into their vehicles.

Abdel-Samed said big grocery store chains used to treat all their stores the same, but now they are customizing each store to cater to the region they are in.

You also need to strategically price different items, and have competitive offerings for staple items such as bananas or bread, he added. Some grocery store items have such low markups for certain items that they’re loss leaders — like the rotisserie chicken, which has become a staple at stores across the country.

But Abdel-Samed said you make up for these products with items that maybe don’t sell as much, but have higher profit margins.

Grocery stores have been launching their own private labels over the past 10 to 15 years, which yield higher profit margins since they don’t have to buy them from a major brand like Procter & Gamble, according to Abdel-Samed.

Although grocery stores make up for low profit margins in other ways, both Zaleski and Abdel-Samed said it’s still a tough business to be in. Smaller stores especially face certain disadvantages.

“Large national chains possess the scale to strike deals with manufacturers on massive quantities of goods that can be sold at a lower per-item price because the chain is selling more of them in a greater number of locations,” said Jim Dudlicek, a spokesman for the National Grocers Association, in an emailed statement. “To compete, some smaller independent retailers may become members of wholesale organizations or buying cooperatives that secure volume discounts that smaller grocers couldn’t get on their own.”

We’re also in the middle of the biggest inflationary period in 40 years. Supply chain issues, rising costs and labor shortages are also straining grocery stores, prompting some stores to shut down.