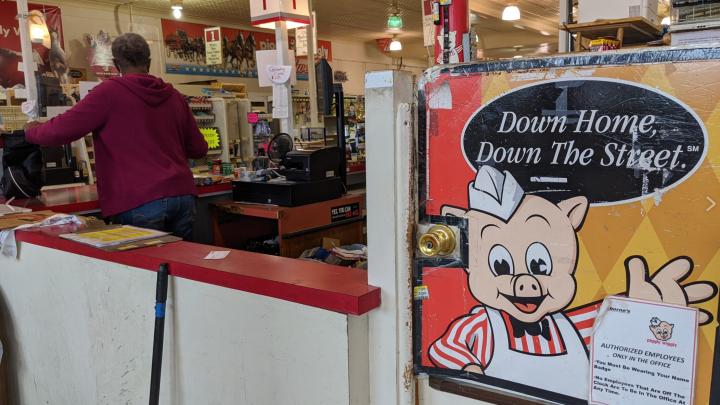 COPY
Customers continued to trickle in to a Piggly Wiggly in downtown Nashville during the store’s final days. The store closed in April. Julia Ritchey/WPLN

Customers continued to trickle in to a Piggly Wiggly in downtown Nashville during the store’s final days. The store closed in April. Julia Ritchey/WPLN
Listen Now

In the last week that the Piggly Wiggly near Nashville’s downtown was open, Ken Blair, a regular, said the store reminded him of the small mom-and-pop shops he used to go to.

“Everybody down here is on a first-name basis,” Blair said. “It’s like a family atmosphere.”

This Piggly Wiggly closed its doors for good in April. Although the chain has two more locations in Nashville and hundreds across the country, community members said the closure feels personal.

The store filled a critical need for some residents who don’t have easy access to groceries. The store closing is especially tough for Gwendolyn Sutton, who has a hard time walking.

Sutton lives two blocks away from the store that closed at a public housing building for the elderly and people with disabilities. She went to the Piggly Wiggly about three times a day on her motorized wheelchair, she said. Now, she and other tenants are unsure how they’ll get by.

“Probably have to catch a bus to go down to Kroger or Walmart, or pay somebody to take you,” she said.

Sutton said she sees Piggly Wiggly as the latest victim of the city’s changing landscape. One developer has studied putting apartments and retail space there.

The first Piggly Wiggly opened in 1916 in Memphis. In those days, people didn’t used to pick up their own items in a store. “When you went to a store, you called out your order to a clerk, and a clerk — listening to you — gathered what you wanted and then you paid,” said Mike Freeman, who has written about the rise and fall of Piggly Wiggly founder Clarence Saunders.

Saunders changed the way stores did business, Freeman said. “Saunders thought, ‘Well you don’t need all these clerks to run a grocery store. You should just put the products out in reach of the customers,'” he said.

Another innovation was putting price tags on items for sale in the store. “The Piggly Wiggly design is the basic design of every convenience store,” said Freeman.

Piggly Wiggly is one of the oldest grocery store chains in the United States. But, like other supermarkets, the franchise has taken a hit during the pandemic from labor shortages. Stores in South Carolina and Alabama have also recently closed, raising concerns about food deserts.