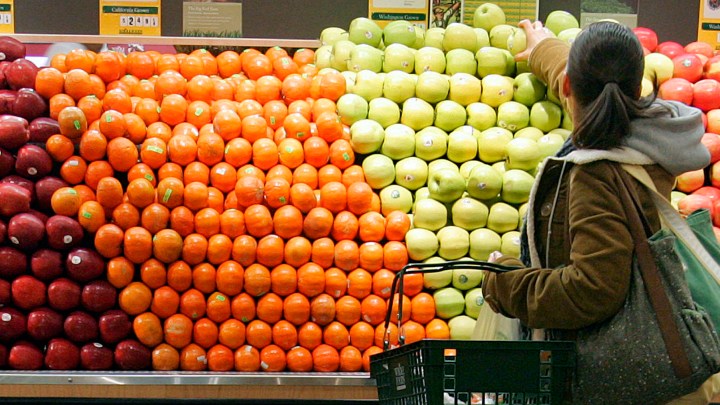 COPY
It's hard to know what grocery store jobs will look like in the future as automation advances. Stephen Chernin/Getty Images
COVID-19

It's hard to know what grocery store jobs will look like in the future as automation advances. Stephen Chernin/Getty Images
Listen Now

Anticipating a continued boom in online orders even after the pandemic ends, grocery titans including Walmart, Kroger and Albertsons are investing millions in high-tech solutions.

In other words, robots to pick the goods customers order online and ways to scale up and speed up the chains’ online abilities.

Sound like a crazy future? In a way, having our bread and milk picked for us, full-service style, is a return to the past. A century ago, grocery shopping consisted of handing a list to a clerk, who fetched everything.

Modernity arrived in 1916, in the form of the first self-serve supermarket. The location: a Piggly Wiggly outfit in Memphis, Tennessee. Without clerks, stores saved a lot of money, which they passed along in the form of lower prices.

We’ve pretty much been shopping the same way since: walking the aisles and grabbing stuff, a time-consuming chore.

Then, when COVID-19 came, supermarkets weren’t just a time suck. They became a germ risk.

So many of us starting shopping online. And it stuck.

Mitch Hayes, vice president at the automation firm Swisslog Logistics, said industry data shows that if you order online once, and then twice — you’re probably hooked.

“The chance that you’re going to order a third time, that number grows very quickly, above 80%,” Hayes said. “So the adoption rate has just exploded.”

Given the demand for grocery delivery and pickup during the pandemic, many supermarkets have more web orders than they can handle, using employees to roam the aisles and pick items.

One solution: a new kind of clerk. Robots.

At one automated warehouse in Brooklyn, New York, run by the robotics firm Fabric, there are no aisles of food. Just stacks of bins, some 80 rows long and 12 levels high.

Gliding among the bins are 20 short, squat robots that look like those Roomba automated vacuums, “which are the ones that climb up and down and sideways in the aisles and grab the totes,” said Steve Hornyak, Fabric’s chief commercial officer. “And then you’ve got the ground robots, hundreds of tiny, little conveyer systems, fulfilling orders, you know, like ants.”

Say a customer has ordered a pint of milk. A climbing robot travels to the bin full of milk and delivers that bin to a ground-based robot, which sends the bin to a workstation. That’s where an analog robot — also known as a human — grabs one pint and puts it in a shopping bag.

The warehouse can fill 1,000 online orders a day, Fabric managers said. That’s 10 times what a regular store can. Before the pandemic, just 5% of grocery orders were online, but that has doubled.

“We basically jumped almost five years into the future.”

“We had not expected to see 10 to 12% penetration until 2025,” Hornyak said. “We basically jumped almost five years into the future. And it persisted.”

In four years, the share of online orders will double again, to around 20%, several industry estimates project.

Grocery chains are putting in other types of automation as well, including robots that walk aisles and take inventory data.

Thing is, some of us like to go to the store, right? Especially to pick our produce.

John Lert, whose company, Alert Innovation, makes robots for retail firms, said parts of the supermarket of tomorrow can stay the same. But the boring experience in the center aisles? Automate that.

“I don’t think many customers really value the center-store experience,” Lert said. “Once I’ve decided I want a box of Post Raisin Bran, I don’t go looking for the very best-looking box.”

The challenge for supermarkets: How to pay for these warehouses, which can cost $5 million apiece?

“They can’t raise prices because of competitive pressures and price sensitivity of customers,” Lert said. “They’re really caught between a rock and a hard place. How do you capture all this, this demand that’s surging, but how do you make money on doing that?”

One way to save money is to build automated warehouses in low-cost, unused spaces. These are called dark stores.

“There are dark [grocery fulfillment] stores in … old fitness clubs to parking decks to even residential buildings that were vacant.”

“There are dark stores in everything from old fitness clubs to parking decks to even residential buildings that were vacant,” said Jordan Berke, founder of Tomorrow Retail Consulting.

Another cost saver: subbing robots for people, though that’s always dicey. Several supermarkets we approached for an interview and tour declined to talk.

“Employees are gonna wonder what the future looks like, particularly as more of the basic tasks in a store are automated,” Berke said. “Retailers have a chance to set a vision for their associates about the different types of work that will be needed as the store evolves.”

Berke said there will be grocery jobs in the future. It’s just hard to know exactly what they’ll look like because all the big chains are investing in robots. The list includes Meijer, ShopRite, H-E-B and Stop & Shop.

Berke predicted that in a couple of years, many of us will be getting our groceries delivered in 30 minutes. That is a fast clerk.