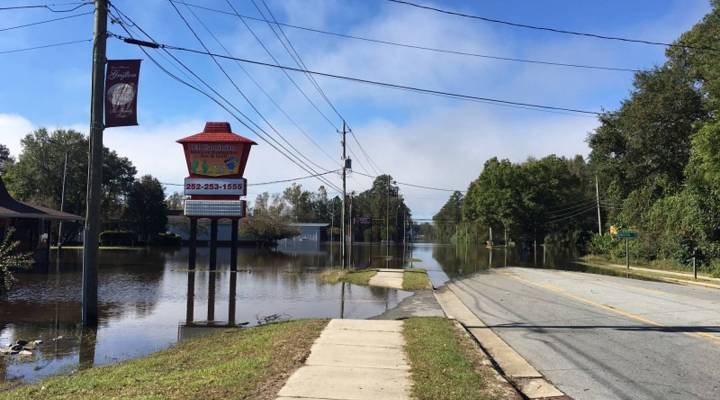 COPY
A small commercial district on the edge of downtown Grifton at the peak of the floods in the wake of Hurricane Matthew. Residents depend on shops there, especially those who don't have an easy way to get to other stores in nearby towns.  Jay Price/WUNC

A small commercial district on the edge of downtown Grifton at the peak of the floods in the wake of Hurricane Matthew. Residents depend on shops there, especially those who don't have an easy way to get to other stores in nearby towns.  Jay Price/WUNC
Listen Now

In rural communities, a grocery or restaurant can be a lifeline. So when disaster like the flooding from Hurricane Matthew closes one, even for a few weeks, it can feel like something more than just losing a store.

That’s how it has been in Grifton, a small town in Eastern North Carolina.

Kelly Thomas was recently looking down a flooded street at the brown water flowing around her restaurant, a Highway 55 Burgers Shakes and Fries fast-food franchise. The water was inside as well as outside.

It also had flooded three other businesses on the same street: a Piggly Wiggly grocery store, a small Dollar General variety store and a new Mexican restaurant that had been just days from opening.

Thomas had been coming to the same spot two or three times a day for nearly a week just to look and think, since there wasn’t much she could do about the damage yet.

“I know that some people think that it’s devastating,” she said. “But for me to be able to process it, I kind of have to see it and see the progress of where it’s at so my mind can process ‘Hey, this is what’s happening.’”

That’s kind of why I was there, too. Grifton is my hometown. It’s about what you expect from a place of 2,700 people: A small main street, a handful of shops and restaurants that aren’t making anyone rich. A few churches.

One thing, though, makes it different from other small towns. It’s built on a large creek named the Contentnea.

Every spring brings a run of a fish,  shad. And in the early 1970’s town leaders decided that could be a good theme for a festival. The Shad Festival has since become a kind of claim to fame, and prompted other towns nearby to start their own festivals.

But the creek doesn’t just give, it also takes from the town.

In 1999, flooding from Hurricane Floyd was even worse, almost filling the restaurant Thomas now owns, after several years working there as a manager.

“Sixty-three inches inside,” she said.

That flood destroyed dozens and dozens of homes, flooding pretty much everything on one side of the main drag, Queen Street.

The latest flood has damaged fewer homes, perhaps 20 to 30, said the man  trying to hold things together, interim town manager Mark Warren. But he was afraid that some of the residents of the damaged homes might not return. And something else was worrying him last week.

“The only grocery story we’ve got is under water,” he said. “The only clothing store here is the dollar store. Which, that’s under water.”

Homes near Contentnea Creek in Grifton at the peak of the flooding.

That’s a blow, especially to low-income residents with no transportation to get them to a supermarket in Ayden, seven miles north.  The small Piggly Wiggly grocery store and the Dollar General aren’t fancy. But Grifton residents like Cassandra Roach have been glad to have them.

She was especially shaken to hear there was a chance the grocery story might not return.

“I go to that Piggly Wiggly five or six…. I’m in there almost every day,” she said. “Wow.”

The good news is, Grifton isn’t in this alone. Charities are helping out. And few blocks away from Thomas’s restaurant, a utility crew was working at the edge of a flooded neighborhood. The logo on their truck said “Ayden.”

Ayden has also sent police officers and firefighters to help out.

That’s the thing. Grifton has just 15 town employees and general budget that’s only big enough to buy one house in a nice neighborhood in, say, Charlotte. But it and neighboring Ayden have had to team up for so long it’s automatic. They even share the high school I graduated from, Ayden-Grifton High.

One day last week two churches had set up tables at Ayden Elementary School, feeding people from both towns.

Volunteers from Straightway Holiness Church in the neighboring town of Ayden drop off hot meals for residents of an assisted living center in Grifton.

Steve Tripp, the mayor of Ayden, watched as people lined up for spaghetti, boiled cabbage, and fragrant chicken and rice. He said a lot of the outside media attention was going to the floods in Greenville to the north, and Kinston, to the south; cities with a lot more ability to handle a disaster.

But Ayden and Grifton have something else, he said.

As he spoke, the church volunteers fixed stacks of takeout plates, and loaded them onto a small bus to take them to a Grifton nursing home that had been without power for days.

Tripp said that if Grifton residents without cars need groceries now, or months from now, something similar will happen. The community will get them to a supermarket one way or another, whether it’s their neighbors or churches giving them a ride.

Now, with luck, it looks like that might only be necessary for a couple of months. Warren, the Grifton interim manager, said he  heard the Piggly Wiggly has a team assessing the damage and it hopes to be able to reopen. The variety store, too.

And if those businesses have any problems with their current sites, he said that he would do all he could to find them another spot, and speed up any permits required.

For a town like Grifton, he said,  even a small grocery is too big to fail.

“Oh we will be here,” she vowed, looking at the brown water. “We will rebuild and get back open and we’ll be OK.”