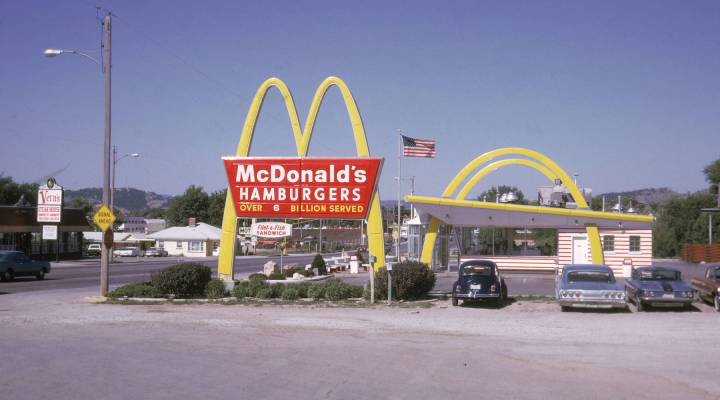 The other way they like to say it? “Over 99 Billion Sold.”

That’s been McDonald’s line since April 1994, when it stopped updating the number. McDonald’s would not comment on whether it still tracks the number of burgers sold.

McDonald’s has been tracking that number since before it was McDonald’s, according to Mother Jones. When the first McDonald’s opened on April 15, 1955, its sign read: “Hamburgers. We have sold over 15 million.”

How is that possible? Well, when Ray Kroc decided to launch McDonald’s as a burger franchise, he modeled it after a restaurant owned by brothers Dick and Mac McDonald. The original sign accounted for all of the burgers they sold prior to teaming up with Kroc.

By 1958, McDonald’s had sold its 100 millionth hamburger, according to the company’s website.

There has been some speculation about how many burgers McDonald’s has sold since 1994. A couple of years back, the Wall Street Journal speculated that McDonald’s might be closing in on selling its 300 billionth burger. We are not so sure.

Back in 2010, a post on Dine Indie blog quoted a McDonald’s training manual noting that the burger giant sells “more than 75 hamburgers per second, of every minute, of every hour, of every day of the year.”

Let’s do some math here: There are about 31.536 million seconds in a year. Multiply that by 75 burgers and you get 2.365 billion burgers a year. It has been 23 years since 1994, and if the company had sold the same number of burgers each year, it would have sold nearly 55 billion more burgers since then.

That seems about right considering that about 9 million burgers were sold at restaurants and fast food places in 2014, according to NPD Group, a business analytics company. Americans eat a lot of burgers, and not just at restaurants. According to PBS, Americans eat on average three burgers a week — equivalent to about 50 billion burgers a year. When they do go out for a burger, they now have a variety of options. As a result, McDonald’s competitors, like In-N-Out Burger, Five Guys and Shake Shack have been taking a bit out of its market.

Nevertheless, in addition to its all-day breakfast options, McDonald’s is still selling billions and billions of burgers.