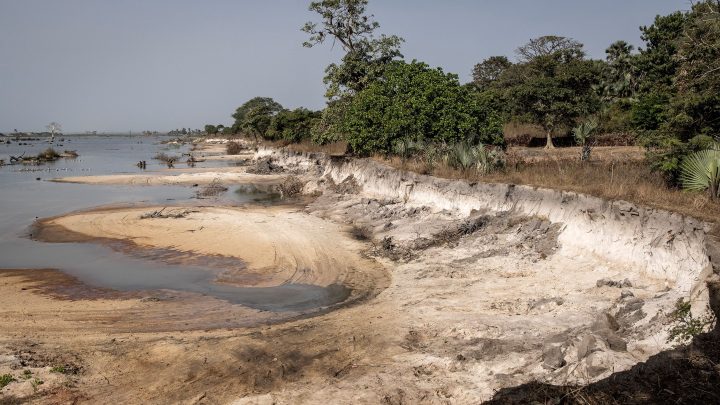 Excessive mining is driving up the cost of sand, but it's also devastating the environment and mining communities. Above, a sand mining site along the Gambian coast in 2021. John Wessels/AFP via Getty Images

Excessive mining is driving up the cost of sand, but it's also devastating the environment and mining communities. Above, a sand mining site along the Gambian coast in 2021. John Wessels/AFP via Getty Images

Sand is mined more than any other mineral in the world. Roughly 40 billion to 50 billion tons of aggregate sand (including gravel and crushed rock) are extracted every year from the earth. The United States alone produced 960 million metric tons in 2020. Demand for sand is not only depleting the resource, it’s causing a host of issues, driving up the cost of development while also creating dire environmental and social consequences.

The enormous spike in sand consumption is a relatively new problem, driven by the shift from rural to city living. But the exact amount of sand mined every year is unknown. Global extraction is not well recorded, making it hard to know how extensive the crisis is. Still, the conservative estimate on yearly global sand extraction is 40 billion tons, according to the United Nations Environment Programme.

“It’s only probably in the last 20 to 30 years that sand mining, extracting sand from the ground, has really started to create major problems,” said Vince Beiser, a journalist and author of “The World in a Grain.” The world, and especially developing countries, are undergoing an “incredible burst of urbanization,” he said, “building cities at a scale and on a pace that’s never happened before in human history.”

And builders need a lot of sand to do that. The construction industry consumes the largest amount of sand in the world. Concrete and cement production are particularly dependent on sand; concrete is made up of 25% sand and 45% coarse aggregate.

The use of sand, gravel and crushed rock in construction is predicted to more than double by 2060, when world population could top 10 billion, according to a 2019 report by the Organization for Economic Cooperation and Development. Floor area per capita is set to double by 2060 for developing countries. Every person on the planet uses an average of about 40 pounds of sand per day, the United Nations reported in 2019, and that will continue to grow with urbanization trends. As we build cities, roads and parking garages, the sand that’s locally available is depleted and the material must be brought in from other areas — an expensive solution.

Those transportation costs are adding to the price of development, said Aurora Torres, an ecologist and environmental researcher.

“The moment that you start increasing the transportation distance, it becomes the biggest fraction of the price,” she said. Local scarcity has given rise to an international sand market, forcing prices higher for the commodity.

The “right” kind of sand

What about all the sand in the Sahara, Gobi and Arabian deserts?

Desert sand is created by wind erosion, resulting in grains too fine and round to be used for building. The sand in concrete is often mined from lakes, rivers and deltas, where erosion creates the jagged sand needed for cement.

“What happens is that the demand is still high, but you have a lower supply of material from formal sources. So this commonly leads to an increase in the price, then triggers a lot of illicit activity,” Torres said.

This happened in China, Torres said. When the government introduced stronger regulations for river sand mining, the price of river sand increased by 600%.

“This triggered a lot of illicit activity,” she said, “many people silently became part of this illicit supply of materials.”

And in areas where illicit mining is prevalent, it can devastate communities. India is the second largest producer of concrete in the world, and much of its sand industry is dominated by organized crime groups known as sand mafias.

“The conflict over sand has created, I don’t want to say warfare, but pretty large-scale violence,” Beiser said. “Communities are being targeted for violence,” he said, “it’s literally destroying people’s livelihoods.”

Singapore, for example, is a high-density city-state undergoing massive and rapid development, and it relies on sand imports.

“This has led to many conflicts in the area, and in the past Singapore has been accused of stealing sand from neighboring countries, and it was even accused for the disappearance of more than 20 islands in Indonesia,” Torres said.

What do we do?

Reducing demand for sand is paramount, according to Torres and Beiser. The most important way to limit the environmental and societal issues that result from sand mining is to significantly decrease our need for the resource.

For Torres, this means shifting priorities and building differently.

“It’s our idea of progress that the more successful we are, the bigger house we will have, the more cars we will have, and we need to act against that,” she said. A high floor area per capita means a large footprint in the sand, figuratively.

Perhaps the best place to start is recognizing the crisis exists.

“I would just like people to be much more aware of how crucial this mineral is for our lives,” Torres said.