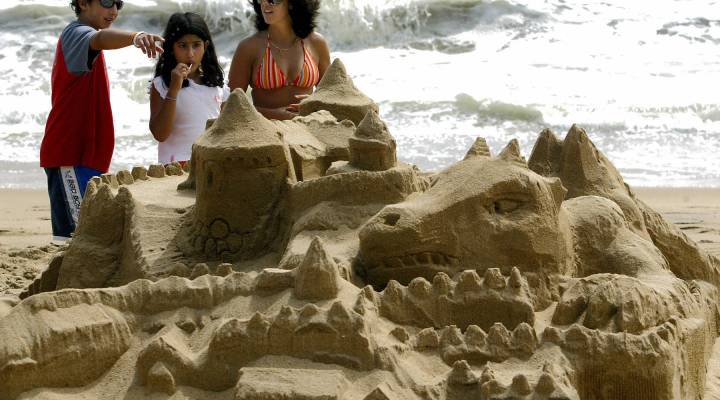 COPY
People observe an intricate sandcastle built on a beach.  MARTIN BERNETTI/AFP/Getty Images)
Brought to You By

Sandcastles have been around a while. In the 1970’s, a couple of guys even started an organization called Sand Sculptors International — sort of the de-facto source for sandcastle standards.

The Torrez family from New Mexico.

But that’s not really sand castles a lot of Americans are used to. Growing up, a lot of kids used to make them using a bucket and maybe a plastic shovel. Now, plastic molds of the Parthenon or Taj Mahal are readily available for less than five dollars.

JT Estrela uses plastic sand castle molds more often than most. He’s the the owner of San Diego Sand Castles and has classes most weekends teaching families how to build epic castles.

Leonard and Renee Torrez brought their four daughters ages four, six, eight and 11 from New Mexico to take the class.

“The whole secret is you have to pack the sand in there like really tight,” Estrela told the Torrez kids. “Flip it over and you kind of give it a little twisty-twist like that to get it to slide out.”

Four-year-old Myla Torrez gets it. She and her mom get lost in the animal molds.

Ted Siebert’s been making sand art for about 30 years. He even wrote a book called The Art of Sandcastling.

“It’s the simplest toy or building blocks there is,” said Siebert.

Mark Barnes owns Saugatuck Drugstore on Lake Michigan — where a lot of people from Chicago and Detroit spend their summers. The store’s been around 103 years. He said it used to be the only place people could get sand molds in the area. Now they can get them at Wal-Mart — or online.

“Before that became more of an issue these portable sand castle molds were popular for us,” said Barnes. “You know we would restock them nearly every single day.”

Robin Leonard works at Hape, a German educational toy company that, five years ago started making intricate sand castle molds. She remembers back in the 1960s, when kids were building sand castles with metal tools.

“But, of course metal buckets and molds and things like that always have that crease,” said Leonard, “They can’t bend and they don’t have the ability to have those fine details about them. And so, of course, plastic allows us to do that.”

Hape now has offices in Florida and Canada. The sand castle molds that they sell are produced at a factory in China. In fact, all of the toy distributors Marketplace spoke with work with Chinese factories to produce their molds.