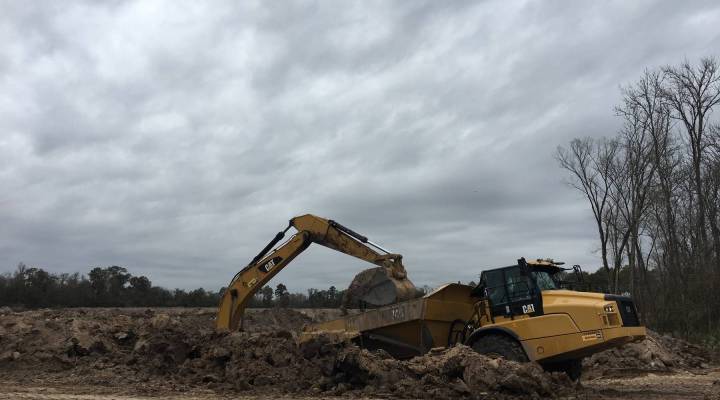 Sand is a key ingredient in concrete, so in Texas, where cities are growing and construction is booming, sand mining is good business. But there are concerns around Houston that companies that dig for sand along rivers contributed to the disastrous flooding the region saw from Hurricane Harvey.

Now, in an unusual move in that business-friendly state, lawmakers are considering new restrictions on the industry.

Harvey’s flooding along the San Jacinto River ripped some homes completely off their foundations. The storm also flushed huge amounts of sand down the river and piled it up on the banks. According to Matthew Berg, who runs a one-man flood risk advising firm called Simfero Consultants, the area along the river was loaded with sand even before Harvey.

That natural bounty has increasingly attracted companies that gather the sand and sell it as an ingredient for concrete. Nationwide, it’s an almost $8 billion industry.  Locally, it’s the largest industrial activity along one fork of the San Jacinto River.

“Anything that has construction, any type of new construction, is going to have sand in it,” said Rob Van Til, managing partner with River Aggregates, a Houston-area sand mining company.

The company’s product eventually winds up in “all your roads, all your homes, all your hospitals, all your churches, all your schools,” as Van Til put it. At one of the company’s mines, excavators dig out huge mud pits, trucks move the mud off to where it’s cleaned up, and the resulting sand is eventually sent off to concrete plants.

“The demand for concrete and the use of it, so all the ingredients, definitely is increasing here,” said Ed Mears, a manager with Pulice Construction, a concrete company active in the Houston area.

The Texas Demographics Center expects the Houston region’s population to grow by 1.7 million people over the next decade. So sand is in high demand, but some are now blaming the industry for making Harvey’s destruction worse.

“Do I feel that the sand mining operations contributed? Absolutely,” said Houston City Council Member Dave Martin, who argues the companies mine too close to the river. “What in essence happened during Harvey was uncontrolled water coming our way, grabbing sand, and then bringing it down and depositing it into our backyard,” Martin said.

The way Martin describes it, that buildup led to the river not being able to hold as much water. So it flooded farther into local neighborhoods than it would have otherwise.

The industry disputes this. According to Van Til, Harvey’s flooding didn’t wash sand away from his company’s mine to other areas.

“The water comes in very fast, but it leaves fairly slow,” he said. “So we really had no loss of material, no loss of anything leaving the property other than water after Harvey.”

Van Til said the sand pits even held back some of the floodwaters.

The science behind the issue is a little murky.

“We know that in some aspects they’re not a problem, they even may be a benefit,” said William Dupre, a geology professor at the University of Houston. “We know in other aspects they are a problem. What we certainly don’t know is the net impact. Because that’s like a lot of things, like urbanization, like building dams, they are both a problem and a benefit.”

Texas lawmakers are expected to tackle the issue when they meet in the new year for the state’s legislative session. One proposal  would create a new inspections program, require a “hydrology assessment” for mine permits, and make it a crime for companies to falsify records.  Republican Governor Greg Abbott has already instructed state regulators to crack down on any violations of existing rules.

As the industry hums along and the Houston region continues to grow, the local flood district is planning more research, and the different sides are lobbying lawmakers. The state’s legislative session gavels in on January 8.

Correction (Jan. 8, 2019) An earlier version of this story included incorrect estimated numbers for population growth in the Houston region of Texas. The text has been corrected.