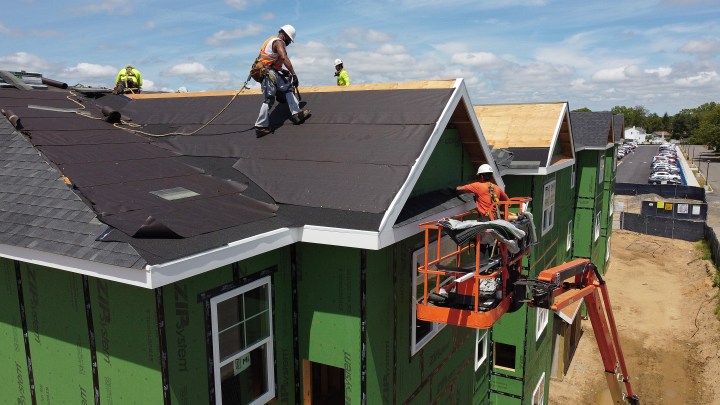 COPY
Higher rents in outlying suburbs have been an incentive for builders to construct more apartments. Al Bello/Getty Images

Higher rents in outlying suburbs have been an incentive for builders to construct more apartments. Al Bello/Getty Images
Listen Now

When people started moving out of cities during the pandemic and into the suburbs, they didn’t just push up home prices in those areas.

“They also bid up rents in these outlying areas,” said Brad Dillman, chief economist with Cortland, a developer of multi-family buildings.

Those higher rents in outlying areas have provided an incentive to build more apartments. “When we think about where developers might want to build, it’s very clear that there’s more and more development being pushed into suburban and exurban and even what we’d call outer ring type of markets,” Dillman said.

Especially in Florida, Arizona, Texas and other sunbelt states.

John Kirk is managing director of Embrey Partners, a multifamily development company based in San Antonio. Even though renting is getting more expensive, he said it still beats buying for many people.

“You know, people need a place to live,” he said. “Affordability for just to go out and buy a home, the headache to buy a home, the process, the downpayment, the maintenance — it just makes it tough.”

The supply of multi-family units still isn’t keeping up with demand, Kirk said. That’s in part because it’s been tough to source building materials and because labor is in short supply.

“Being a fully integrated development company, with our own construction arm, it is hard. We see it and breathe it daily,” Kirk said.

But multifamily builders have some advantages, too. For instance, real estate professor Susan Wachter at the Wharton School said lots are in short supply.

“If you can build four, 10 units, on a quarter-acre as opposed to one unit on a quarter acre, you save, you economize on the cost of land,” she said.

As more multi-family buildings go up this year, Vitner says we can expect rents to stabilize.