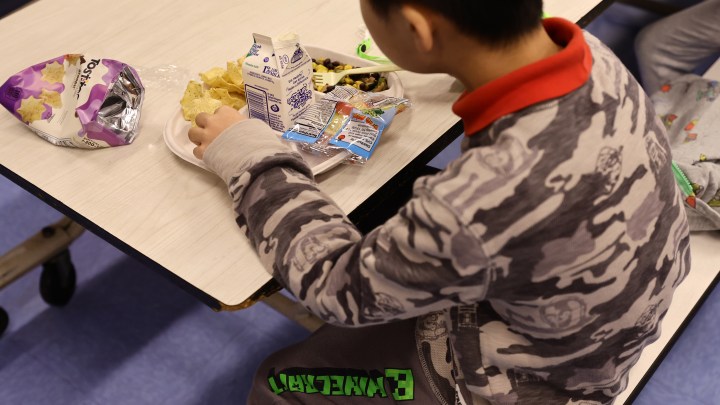 COPY
During the pandemic, most schools were able to offer free lunches under a federal waiver. But that waiver's set to expire this summer. Michael Loccisano/Getty Images

During the pandemic, most schools were able to offer free lunches under a federal waiver. But that waiver's set to expire this summer. Michael Loccisano/Getty Images
Listen Now

We get the latest monthly inflation reading from the Department of Labor on Tuesday.

The data is again expected to show rising prices for just about everything, including food. Schools — which provide meals to millions of kids each day — are watching those increases for milk, veggies and chicken fingers, and they’re getting nervous.

During the pandemic, most schools were able to offer lunch to students for free under a waiver from the U.S. Department of Agriculture, which is set to go away on June 30. Meanwhile, those school lunch chicken fingers keep getting pricier.

Noah Atlas tries to give the people what they want. In this case, the people are the students of Anoka-Hennepin School District north of the Twin Cities, and what they want is tater tot casserole. (Or, as they call it in Minnesota, hot dish.)

“They were asking, ‘Can we get tater tot hot dish?’ Well, we’ve never really served it, or not in a long time,” said Atlas, the district’s director of child nutrition.

But tater tots are kinda pricey right now. “And as we were looking at that recipe, we were saying, ‘Which potato is going to cost us less as we make it and will still taste just as good?'” he said.

Next year at Jefferson County Public Schools near Denver, students will pay $1 more for lunch than they paid in 2019, before it was free. That’s a 30% increase.

“It’s very disheartening, I think, mainly because I know there’s families that won’t be able to afford that amount. So that means they won’t participate with us,” said Beth Wallace, who leads food and nutrition services for the district.

If fewer kids participate in school lunches because they can’t afford them or don’t want to be seen getting free lunch, that could lead to a negative spiral, according to Carolyn Vega, associate director of policy analysis with Share Our Strength, a nonprofit aimed at addressing childhood hunger.

“If these school nutrition departments can’t make it work, they’re gonna have to scale back what they’re able to offer,” she said. “That may affect participation, that means even less money coming in, which makes it even more challenging to meet the requirements.”

The thing about having tater tot casserole without tater tots is that kids can be pretty fickle when it comes to food. If they don’t like what school districts can afford to feed them, they might just skip lunch altogether.