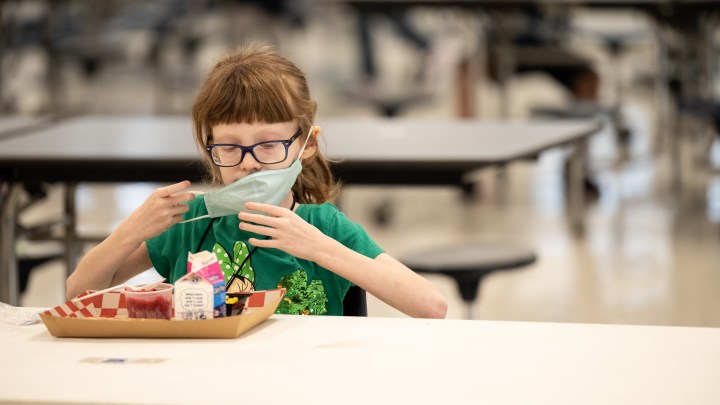 COPY
Some schools districts ended up feeding fewer students overall than when all schooling was in person. With many students returning to in-person school, this will no doubt change during the 2021-2022 school year. Jon Cherry/Getty Images

Some schools districts ended up feeding fewer students overall than when all schooling was in person. With many students returning to in-person school, this will no doubt change during the 2021-2022 school year. Jon Cherry/Getty Images
Listen Now

In a bid to continue to reach the estimated 12 million children in the country who may not always have enough to eat, the U.S. Department of Agriculture has said it will extend universal free lunch through the 2021-2022 school year.

To school districts like Littleton Public Schools in Denver, Colorado, that’s welcome news. Littleton has cycled through remote, hybrid and in-person schooling this year –– the district ended up feeding fewer students overall than when all schooling was 100% in person.

“We had bus routes going through our district and we were providing meals to students that way,” said Jessica Gould, the district’s director of nutrition. “We have had different nightly pickups.”

Because of temporary policy changes made by the USDA at the beginning of the pandemic, free meals have been provided to all children, sometimes even in bulk. But that hasn’t been a catch-all solution.

“Families often have transportation or scheduling challenges in terms of getting to meal pickup,” said Diane Pratt-Heavner with the School Nutrition Association.

Higher costs and fewer meals are a reality for school districts everywhere, Pratt-Heavner said. Littleton Public Schools, for example, has spent nearly $74,000 more on packaging in the last 12 months. Early attempts at getting food to remote students have had to change, too. “Some of those efforts were limited by students returning to schools,” Pratt-Heavner explained, “those [school] buses suddenly need to be used to transport the students instead of the meals,” she said.

The impact of universal free lunch will likely be bigger next school year, said Lauren Bauer, an economist at the Brookings Institution. “Many more children are actually going to be in school all the time in the fall than they are now,” Bauer said. Knowing that meals will be freely provided may allow school districts to plan ahead.