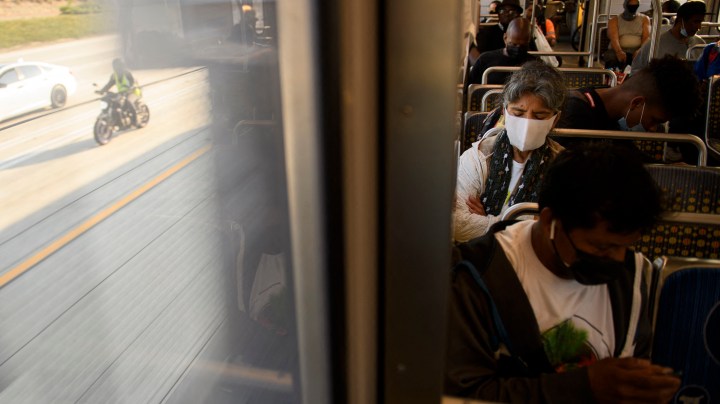 COPY
Above, transit passengers on the Metro C Line in Los Angeles, California. Grants for schools made available through the American Rescue Plan are providing funds for college students' needs, like public transit or child care. Patrick T. Fallon/AFP via Getty Images

Above, transit passengers on the Metro C Line in Los Angeles, California. Grants for schools made available through the American Rescue Plan are providing funds for college students' needs, like public transit or child care. Patrick T. Fallon/AFP via Getty Images
Listen Now

When Heather Griner was a counselor at the Community College in Baltimore County, or CCBC, she realized students’ needs went beyond academics and interpersonal problems.

“Students weren’t coming to me with boyfriend/girlfriend issues. They were coming to us because they were going to be evicted,” said Griner.

“It kinda takes another thing off my back,” said Akira Tisdale, a student at the community college. During the pandemic, she was in charge of buying groceries for her extended family and was often short on cash.

CCBC gave Tisdale gift cards to local grocery stores with funding from the COVID relief laws, including the American Rescue Plan. “So that just helped me breathe a little bit more and focus on my education better,” she said.

There’s now more money available for colleges to help with basic needs. Schools have until midnight on Friday to apply for grants from an additional $198 million made available from the American Rescue Plan. The Department of Education says the money can be used to help with things like food, transportation, or child care.

The idea that colleges would provide this kind of help is relatively new, according to Bryce McKibben, senior director of policy and advocacy with the Hope Center for College, Community and Justice.

“I think there was a presumption that college students would just figure it out, they’re adults, they’ll be fine. In reality, we know adults are struggling in significant rates,” he said.

Research from the Hope Center finds that three in five college students in the U.S. are struggling — and that affects how many are graduating.

In northern Texas, Amarillo College president Russell Lowery-Hart started a program to meet basic needs of students after he realized only 19% of them were completing the program.

“In the beginning, there was a lot of conversations about ‘That’s not our job. I’m not a social worker. We’re here to educate, not to feed,’ ” he said.

But after the college opened food pantries, hired social workers and just started giving cash to students directly, the completion rate went up to 60%.

Lowery-Hart also believes that if employers continue to require college degrees, schools need to make sure they’re supporting students so they can attain them.

“You can’t survive and thrive in any community in America without some kind of post secondary credential,” said Lowery-Hart.