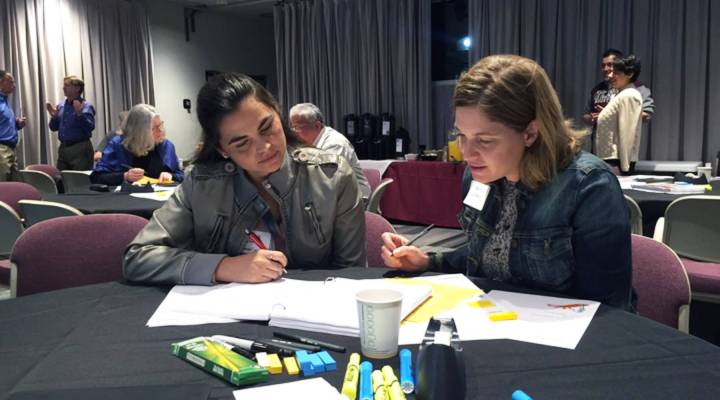 At Mt. San Antonio College near Los Angeles, professors and counselors spent a recent morning holed up in a windowless conference room, armed with copies of the course catalog and pads of yellow and blue Post-its. Their job was to map out, semester by semester, all of the classes a student in a given major would need to get to an associate’s degree in two years.

At Mt. SAC, as the community college is nicknamed, two years is not the norm. Many students work and take classes part time. Only about half finish a degree or transfer to a four-year college within six years, about the average for a California community college.

“Their experience turns into a six- and seven-year experience,” said Eloy Ortiz Oakley, chancellor of the California community college system. “Those first two or three years, they’re still trying to figure out what courses to take, they’re trying to take as many classes as they can and many of those classes don’t lead to the major that they choose.”

Under pressure from students and lawmakers to change that, the whole California system — all 113 community colleges — is moving to an approach known as “guided pathways.” With $150 million from the state, as well as philanthropic funding, more than 20 colleges should be up and running within three years. The idea is to help students choose a course of study earlier, then give them a clear road map to get to their goal.

“We want to make sure that when a student comes to our campus, they know what courses they need to take to get to their educational outcome, and that we are organized in a way that makes it easy for them to take those courses,” Oakley said.

The approach has shown promise at colleges in Florida, Tennessee and New York. At Mt. SAC, the overwhelming choice started from the very first contact with potential students, when they tried to choose a program on the college’s website.

And on. Two hundred programs, in all in a scrolling list.

“If I’m a student, new to the whole college world, what am I going to do here?” he said.

The college started by sorting those programs into eight career clusters, like aviation, electronics and manufacturing — that’s one cluster. Health, wellness and public service is another. Students will choose a cluster early on, then take basic courses related to the field before deciding on a major.

At the mapping session, professors teamed up with staff from the counseling office to create the suggested pathways to those majors. Health science professor Kelly Coreas worked with counselor Alana Bachor to map the respiratory therapy program.

“They just need one from this list here,” Bachor said, pointing to a list of arts courses.

Coreas tentatively picked ceramics as a recommended course, because respiratory therapists have to work with their hands. But then she had second thoughts.

“I wouldn’t want to pin a student down to taking ceramics if they were really interested in world architecture,” she said. “I want to give them that opportunity to explore, because I also think that that’s part of what college is about.”

Officials said there will still be plenty of opportunities for students to explore, if they want to. But students like Janelle Yanez, who’s studying fire science, want a plan. While exploration might be fun and even life-changing, at today’s college prices, it’s also expensive.

“I’m always willing to learn something new that’s not even part of my plan,” said Yanez, 27, “but if it’s not steering me in the direction to a career, then it’s not beneficial for me.”