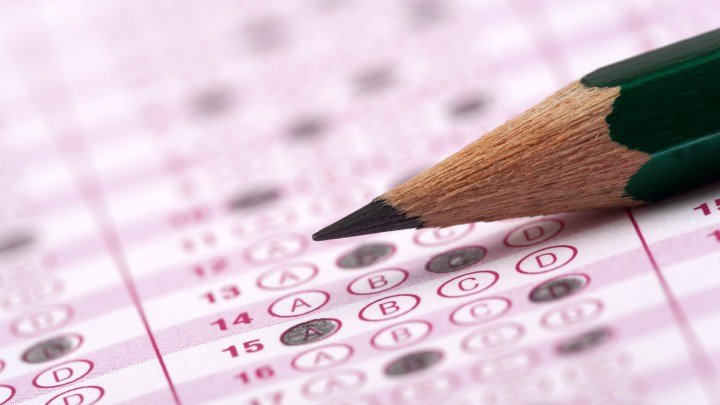 COPY
More than 1,800 colleges and universities in the U.S. don't require the SAT or ACT for admissions, the National Center for Fair and Open Testing says. basar17/Getty Images

More than 1,800 colleges and universities in the U.S. don't require the SAT or ACT for admissions, the National Center for Fair and Open Testing says. basar17/Getty Images
Listen Now

There’s an emerging divide in this country over the role standardized tests should play in admission to college. Over 1,800 schools in the U.S. don’t require students to submit SAT and or ACT results, according to the National Center for Fair and Open Testing.

Many of those policies were adopted during the pandemic. Then, last week, California’s state university system, the largest four-year school system in the country, announced it’s making that change permanent and won’t consider the tests at all. This week, on the East Coast, the Massachusetts Institute of Technology announced it’s reinstating its requirement to take one of the tests.

Both moves are being made in the name of equality and access. So what’s a confused high school junior to do?

High schoolers have been filling out bubbles for decades.

“We’ve been around since 1959,” said Janet Godwin, CEO of ACT, which administers the ACT exam. She said the test was created to help prospective college students, including veterans returning from war, demonstrate they were ready for college.

The idea is that the test is, you know, standardized throughout the country, so a good score could help a student who didn’t go to as strong a high school.

But opponents of testing, like Akil Bello with the nonprofit National Center for Fair and Open Testing, say that “the notion of the diamond in the rough being discovered by the test is a falsehood.”

Students from affluent backgrounds are more likely to do well on these tests, Bello said. “The test is advantaging a particular group of students and disadvantaging the students that they’re claiming are helped by the test.”

“Testing was always part of the conversation, right? ‘Which one you taking? When are you’re going to take it?'” said Patrick Lorenzo, a college counselor with St. Ignatius College Preparatory, a private high school in San Francisco. “Now, the question becomes, ‘Do you want to take it?’ You don’t have to.”

That gives more power to students, Lorenzo said, and lets other qualities shine through on their applications.