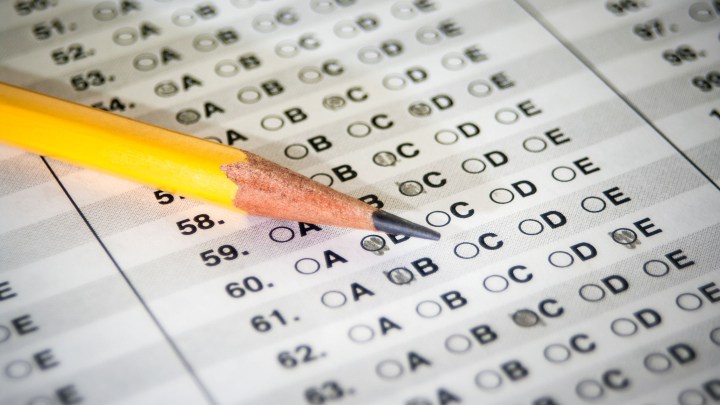 COPY
Some tests were canceled due to safety concerns, and many testing sites closed. michaelquirk via Getty Images
COVID-19

Some tests were canceled due to safety concerns, and many testing sites closed. michaelquirk via Getty Images
Listen Now

College admissions decisions continue rolling out this week. Offers from the Ivy League go out Tuesday, with Stanford following close behind. That’s later than usual because of a surge in applications this year. Many colleges waived their standardized test requirements because of the pandemic, opening the gates for more students to apply.

In the past, Hamilton College required applicants to submit scores from tests like the ACT and SAT, but COVID-19 made that harder. Some tests were canceled due to safety concerns, and many testing sites closed.

“We just wanted to remove one level of anxiety in a year that was full of lots of other anxiety for students,” said Monica Inzer, vice president for enrollment management at the private liberal arts school in Clinton, New York.

Hamilton is one of more than 600 colleges to go test-optional during the pandemic, according to FairTest, a group that opposes reliance on standardized tests.

The shift created a little more anxiety for Inzer and her staff. Applications were up 26%, she said, and because students applied to more colleges, it’s harder to figure out which students will accept an offer. As a result, Hamilton also increased its waiting list this year.

“We do need a safety valve if we come up short on the class,” Inzer said. “There’s a little more volatility this year.”

Some less selective schools waitlisted more students, too. Dan Warner is vice provost for admissions at Lehigh University, in Bethlehem, Pennsylvania. After Lehigh dropped its test requirement, he said, applications climbed 14%. The waitlist grew almost as much.

“Given some of the lingering trepidations that families might have about health conditions, about the economy,” he said, “it’s going to be less predictable than in the past — I mean, 17-year-olds are only so predictable to begin with.”

Even before the pandemic, many colleges and universities were moving away from standardized testing, which critics say does a better job of measuring privilege than ability and has disadvantaged students of color and low-income students.

“Test optional has really opened up possibilities for students,” said Jeff Selingo, author of the book “Who Gets in And Why: A Year Inside College Admissions.” ”Now what’s going to be interesting is whether that will actually equal bigger enrollments of low-income students, first-generation students, students of color.”