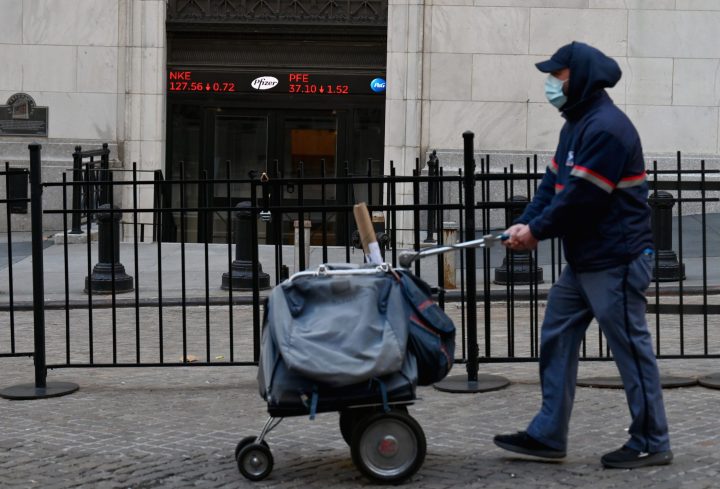 COPY
A USPS mail carrier walks past the New York Stock Exchange on Wall Street. The service stands to benefit from a congressional overhaul. Angela Weiss/AFP via Getty Images

A USPS mail carrier walks past the New York Stock Exchange on Wall Street. The service stands to benefit from a congressional overhaul. Angela Weiss/AFP via Getty Images
Listen Now

Congress on Tuesday approved a bipartisan overhaul of the U.S. Postal Service. The bill gives financial flexibility to USPS, which has struggled with decreasing mail volumes and operational cutbacks. The legislation was supported by postal labor unions. Where does it leave the postal workforce?

When Mark Dimondstein joined the Postal Service as a clerk in 1983, the workforce was growing.

“The Postal Service was a darn good job, good union benefits, union protections and a mission that any of us who joined can be proud of,” he said.

Since about 2007 the Postal Service has been operating in the red, and Dimondstein — now the president of the American Postal Workers Union — said that’s had an effect on workers.

All made worse during the pandemic by safety concerns and large numbers of workers out sick.

“The Postal Service has been operating on a shoestring,” said Monique Morrissey, an economist at the Economic Policy Institute. She said the Postal Service workforce peaked 20 years ago at roughly 800,000. It’s now down to about 500,000 workers. Email and online bill pay have driven down mail volumes and revenue.

“They’ve been short-staffed for a long time. There’s been this long-running decline,” she said.

Another financial challenge has been the requirement — imposed by Congress in 2006 — that USPS pre-fund retiree health care costs 75 years into the future, a practice basically unheard of elsewhere in the public sector, said James O’Rourke, a professor of management at Notre Dame.

“This resulted in a bill for the Postal Service that had to come out of current income,” he said. The service hasn’t been making enough to cover that.

The new legislation removes that requirement by taking future retirees off the Postal Service health plan and transferring them to Medicare. It also forgives billions of dollars in past-due debt.

Dimondstein with the postal union said this could make a big difference.

“Staffing should be better, buildings should be cleaner, newer vehicles on the road,” he said.

The reform bill is estimated to save the postal service more than a $100 billion over the next 10 years.