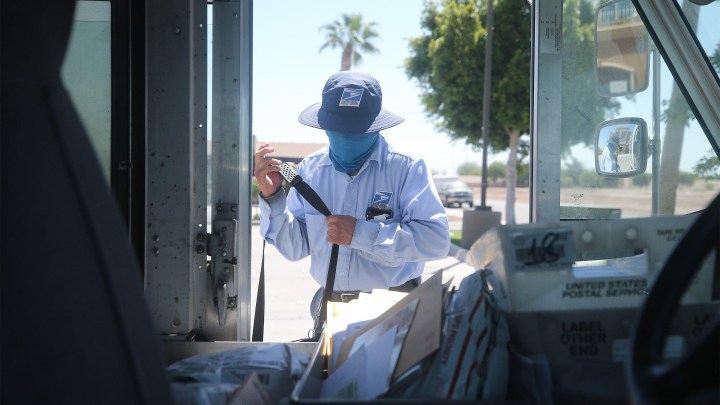 Recent changes at the U.S. Postal Service are causing mail to slow down.

President Donald Trump’s newly appointed postmaster general has clamped down on overtime and late trips as USPS faces financial hardships exacerbated by the pandemic. Those service cuts have left some mail to be delivered a day later. Such delays could lead to more business shifting to private-sector competitors — and that could have consequences for workers.

Mark Dimondstein, now the president of the American Postal Workers Union, worked as a clerk for the Postal Service for more than two decades. He said the job afforded his family of five a comfortable life.

“We had vacation time, we had some money to be able to take vacations,” he said. “I’ve never met anyone that says, geez, I wish I had never been a postal worker. So there’s a certain pride in the work.”

“These are solid middle-class jobs, and they have been for quite a while,” said Monique Morrissey, an economist at the Economic Policy Institute. She said these union career jobs have historically provided more opportunities for veterans and Black workers, who are overrepresented among the Postal Service workforce.

Most private competitors to USPS are less generous with pay and benefits. While UPS has a unionized workforce, FedEx has long relied on contractors and subcontractors for its ground deliveries. David Weil, a labor market expert at Brandeis University, said that pushes wages and benefits down.

“Every time you shift down who’s responsible to one more level, you’re creating another level of a business that has to make a margin,” he said.

Weil points to a private equity analysis that found FedEx workers earned 40% less than their Postal Service counterparts. The same analysis found Amazon is taking the model to an extreme, using a network of gig workers to deliver packages whose net earnings are sometimes below minimum wage.