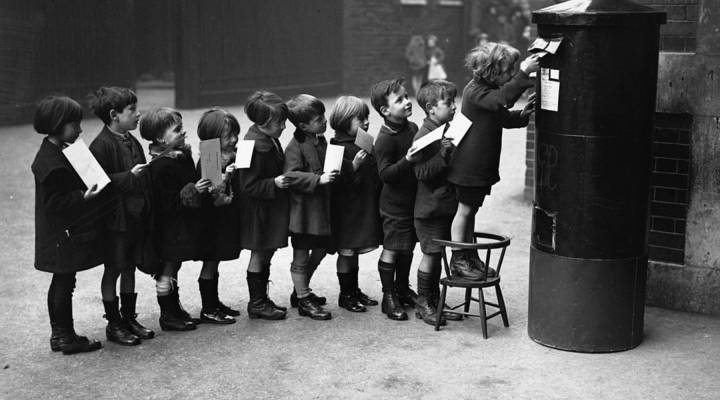 COPY
The postal service was around even before the founding fathers signed the Declaration of Independence. Fox Photos/Getty Images

The postal service was around even before the founding fathers signed the Declaration of Independence. Fox Photos/Getty Images
Listen Now

In her latest book “How the Post Office Created America,” Winifred Gallagher chronicles the history of the post office; From its founding to its current role in the country.

Here’s an excerpt from Gallagher’s book:

The history of the post office is nothing less than the story of America. Of the nation’s founding institutions, it is the least appreciated or studied, and yet for a very long time was the U.S. government’s major endeavor. Indeed, it was the government in the eyes of most citizens. As radical an experiment as America itself, the post was the incubator for our uniquely lively, disputatious culture of innovative ideas and uncensored opinions. With astonishing speed, it established the United States as the world’ information-and-communications superpower.

After the Revolution, America needed a central nervous system to circulate news throughout the new body politic. Like mail service, knowledge of public affairs had always been limited to an elite, but George Washington, James Madison, and especially Dr. Benjamin Rush (a terrible physician but a wonderful political philosopher) were determined to provide the people of their democratic republic with both. Their novel, uniquely American post didn’t just carry letters for the few; it also subsidized the delivery of newspapers to the entire population, which created an informed electorate, spurred the fledgling market economy, and bound thirteen fractious erstwhile colonies into the United States. For more than two centuries, the founders’ grandly envisioned aged postal commons has as one of the few American institutions, public or private, in which we, the people, are treated as equals.

The America of the Early Republic desperately needed physical as well as political and economic development. The post quickly mapped this terra incognita with post routes that connected towns centered on post offices and also subsidized the nascent transportation industry then dominated by the stagecoach, by paying its owners to carry the mail. By 1831, French political philosopher and U.S. coach passenger Alexis de Tocqueville wondered over America’s unparalleled communications system, which brought the latest national and foreign news event to the Michigan outback.

By the time of Tocqueville’s visit, the founders’ ideal of nonpartisan politics had faded, and the post they created to unite opinionated Americans could divide them as well. Slaveholding president Andrew Jackson fumed when abolitionists used the network to send their unsolicited publications to Charleston, South Carolina, where irate locals committed a federal crime by burning the mail—a conflagration that illuminated slavery as a national rather than merely regional issue. Yet Jackson himself scandalously politicized the post with his “spoils system,” which allowed the party that won the White House to hire its supporters for postal jobs wrested from the defeated rival’s ranks—a gold mine of patronage that cemented and sustained the country’s two-party system for the next 140 years.

In the 1840s, the post faced the worst crisis in its history. Antebellum Americans, including the migrants moving from farms to cities, and increasingly to the western frontier, protested its high letter postage by turning to cheaper private competitors who contested its exclusive right to carry mail. The post responded by turning personal correspondence, historically a costly luxury, into a daily staple, which both aided its recovery and transformed the people’s personal lives. The combination of postage for pennies and the Railway Mail Service—a now forgotten wonder that efficiently processed mail aboard moving trains—later enabled many Americans to write to a friend in the morning and receive a reply that afternoon.

The post played a crucial role in one of the nineteenth century’s crowning achievements: turning the Atlantic-oriented United States into a Pacific nation as well. The transcontinental telegraph and railroad of the 1860s usually get the credit, but they followed in the tracks of a post that was already responding to the communications needs of history’s greatest overland migration. (Most settlers got their mail at post offices in general stores, much like the one served by the young postmaster Abraham Lincoln on the Illinois frontier.) The post subsidized the Overland Mail Company’s western stagecoaches but only paid the Pony Express to carry mail at the end of its short life, when the private service helped to keep distant, slavery-free California connected to the rest of the Union.

Like America itself, the post was transformed by the Civil War. When the Confederacy stole its entire southern network, Montgomery Blair, Lincoln’s brilliant postmaster general, used the savings from the discontinued operations to pay for expensive new services, including City Free Delivery, which brought mail to urban doorsteps, and the postal money order system, which initially enabled Union soldiers to send their salaries back home safely.

The post had been the first, and was for a very long time the only institution to give jobs to disenfranchised women that offered them rare entrée into public life. Most had been small-town postmasters, but Blair went further, hiring women for prestigious positions as clerks even at the department’s august headquarters in Washington, D.C. The post had long been prohibited from using enslaved workers, lest they learn from publications circulated in the mail that all men were created equal, but after the war, the victorious Republicans underscored their politics by hiring significant numbers of African Americans. As a black woman, sharpshooting, cigar-smoking “Stagecoach” Mary Fields, a former slave who transported the mail by wagon in the wilds of Montana, broke both barriers.

Around the turn of the twentieth century, the post became a progressive champion for Americans who looked to the government to protect them from the Industrial Revolution’s dark side, notably the powerful new monopolies that deprived them of affordable, competitive priced services. Their fearless if improbable spokesman was Postmaster General John Wanamaker, the Republican merchant prince. Critics accused him of running his department like his legendary namesake department store in Philadelphia, but he used his business genius on behalf of average Americans to fight for Rural Free Delivery and broaden the meaning of “postal” to include parcel delivery and even savings banking.

Despite the austerity imposed by two global wars and the Great Depression, the misunderstood post nevertheless supported, for many years single-handedly, the infant aviation industry required for its Air Mail Service (an unknown Charles Lindbergh was among its pilots). It also linked citizens at home with their loved ones fighting abroad—in World War II with microfilmed Victory-Mail letters (no lipstick kisses allowed). Deprived of funds and stuck with long-obsolete equipment and facilities, the post even managed to cope with the booming middle class’s quadrupling mail volume until 1966, when, amid riots, protests, and burning cities, the institution faced its second crisis, famously illustrated by the weeks-long shutdown of Chicago’s post office.

By 1970, America increasingly looked to business rather than government for problem-solving strategies, and Congress, now accustomed to focus on the post’s bottom line, transformed the tax-subsidized Post Office Department into the self-supporting United States Postal Service. This off government-business hybrid was finally allowed to modernize its facilities for handling traditional mail. Within a decade, however, the post—ruled by a fiscally conservative Congress and hampered by its own mismanagement—failed to join, much less lead, the revolution from paper mail to email that was its next logical development. In 2007, reeling from onerous new regulations as well, the USPS began to report huge deficits and entered its third and ongoing period of crisis.

Since 1775, the post has responded to the nation’s changing needs—indeed, the institution’s advances had often helped precipitate them—but crises and budget-driven policy decisions have gradually, almost imperceptibly, erased America’s collective memory of what this dynamic institution has been and could still be. The people and their elected representatives, who must soon decide the post’s future, now know very little about the institution, past or present. It is time for Americans to learn more, particularly about the post’s modern history.  Restoring the record of how the post made us the people that we are is important, both for this misunderstood, underappreciated institution and for the insights into American history and current affairs that it provides. These recurrent themes include the respective merits of public service and private enterprise, the limits of federal power and states’ rights, the rewards of public-private collaboration, the fruits of bipartisanship, the value of civic institutions, and the nation’s regional and political polarization. The post deserves the effort to remember, because just as the founders had envisioned, it created America.