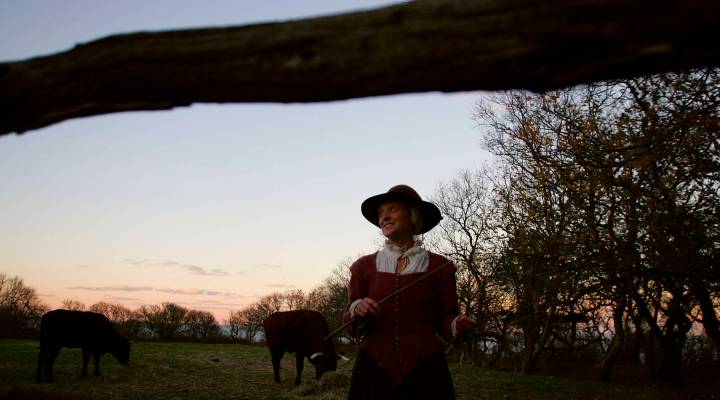 COPY
A role player in Plymouth, Massachusetts, tends cows at Plimoth Plantation. The 17th century replica village was the site of the first Thanksgiving in 1623. Joe Raedle/Getty Images

A role player in Plymouth, Massachusetts, tends cows at Plimoth Plantation. The 17th century replica village was the site of the first Thanksgiving in 1623. Joe Raedle/Getty Images
Listen Now

When you think about the first startup, what comes to mind? Google? Amazon? But according to John Butman, co-author of the upcoming book “New World, Inc.: The Making of American by England’s Merchant Adventurers,” the first American startup may have been several hundred years ago, when merchants from England settled in the United States. According to Butman, you could say these merchants founded the colonies, like Jamestown and Plymouth, that became the country we live in today.

Butman picks up the story with the Pilgrims, who may very well have been among these early merchant adventurers.

We really had to think about the prevailing myths, the ones that we really love about the founding of America. And the most prevalent and dominant one is that the Pilgrims sailed over in 1620 and got everything started. That is really not the case. Much as I love the Pilgrims, they really were toward the end of a really long process, a 70-year process, of what we think of as the great startup of America.

And interestingly, the Pilgrims were actually a funded venture. They had a joint stock company behind them, 70 investors put money into them. And they did not come here really for religious freedom. They already had that in Holland. They came basically for economic purposes.

So we think of them as the end of this long process, this unbroken chain of ventures, that really started in 1550. England was in crisis at the time. A major product was woolen cloth, and the market had basically dried up. So this group came together, led by a number of merchants, and they said, “We need a bold, new solution.” And they came up with the idea that they needed to sail out of England and beyond continental Europe and find a whole new market and start up a whole new enterprise. China didn’t work out as a place to sell products. They couldn’t go south because the Spanish really ran the show there. So they kind of inevitably, inexorably got pushed towards America.

For a while, they believed that America could be a marketplace for their cloth because they thought, “Oh, it’s cold, and the natives there will need our woolen cloth to keep them warm.” They didn’t understand that the natives were well taken care of in terms of fur and other clothing to wear. They gradually started to move towards America. But what they learned was, it was very difficult to send a ship over on a commercial venture and get enough goods in that time they had and make it pay. So they realized, “We have to establish an operation on land, and it has to stay there, and it has to be stable.” But they said this could actually work, and so there became excitement about it. 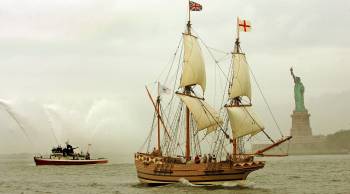