The world’s top companies in telecommunications, social media, electric vehicles and iPhone assembly were all born in one place: Shenzhen, China. Most frequently referred to as the Silicon Valley of hardware, Shenzhen remains a tech boom town luring hopeful startups, tech incubators and global electronics geeks of all stripes. It doesn’t hurt that the skies above Shenzhen, in contrast to many polluted Chinese megacities, are often blue.

One way to observe Shenzhen is to see it through the eyes of an entrepreneur trying to make it here. I visited the office of Duunokid, a multilingual learning company with a program pairing Chinese preschoolers with native-speaking teachers far away.

On one screen, a teacher in Spain sings and chats live with her student, a Chinese toddler named Elsa. On the other: Elsa’s mom is trying to chase her down, as Elsa has crawled off screen. Duunokid founder Monica He, a native of Liaoning in northern China who studied linguistics at the University of Chicago, picked Shenzhen in the far south as the most enticing place to start her venture.

“After a lot of thinking, I thought ‘Shenzhen is great,'” He said. “The government gave me free office space. As we stayed here longer, we gradually discovered the ecosystem is quite good.”

This ecosystem has nurtured titans including Huawei — the market leader in wireless telecom equipment, which the Trump administration has sanctioned on grounds of threatening U.S. national security — and Foxconn, the Taiwan-headquartered contract manufacturing giant that assembles iPhones and other electronic products in Shenzhen.

What makes up the Shenzhen ecosystem? One element is government support.

“We have gotten a 400,000 RMB award from the Shenzhen government,” which comes out to nearly $60,000 U.S., He said, “for our innovativeness, for being a pioneer in the industry, for social impact.” He gained the attention of policymakers after placing third in a mainland startup competition.

Indeed, Shenzhen makes big bets on innovation, including green technology. By government decree, every cab in the city is an all-electric vehicle, as is every public bus. The city contract with Shenzhen-born battery and electric vehicle maker BYD helped turn BYD into the world’s largest company in the space.

By some accounts, the golf-cart sound of electric cars and buses has helped quiet the overall din of Shenzhen, though most private vehicles on the road remain petroleum-burning combustion-engine types.

Here, technology and ideas develop at a rapid pace. In just 40 years, Shenzhen exploded from fishing village — tapped by China’s central government to be an early test case for post-Mao-era market economics — into a tech metropolis of more than 12 million residents. At the center of the action: a chaotic electronics market known as Huaqiangbei. By most accounts, it is the world’s largest.

In stall after stall, in one high-rise after another spanning multiple city blocks, Huaqiangbei merchants hawk chipsets, finished laptops and drones ready for export. The dominant sound here: packing tape. You can shop for, say, a surveillance camera or buy a bootleg one or design one yourself.

(In my own case, I found a man in a dirty T-shirt to replace my phone battery for about $14 — parts and labor included — but keep in mind that’s the rip-off-the-foreigner price.)

“People say that about 90% of the electronics used globally are produced in this city,” said David Li, executive director of Shenzhen’s Open Innovation Lab, a space to nurture hardware entrepreneurs supported by the city government.

People say that about 90% of the electronics used globally are produced in this city.

Huaqiangbei began as an electronics outsourcing spot for foreign firms, Li said, but quickly became a tinkerer’s haven for rapid innovation as the convenient presence of electronic innards allowed for instant trial and error. One scrappy startup turned out a smartphone called Thunderstorm.

“The Thunderstorm phone has seven speakers. It has the volume of a boom box,” Li said. “The phone was designed and created for construction workers.” He uses the term “mashup” to describe Shenzhen’s collision of parts, geeks and ideas.

And the mashing up happens quickly, in part because Shenzhen is known for copying, imitating and reverse-engineering. Ideas spread quickly in this place, so one has to move fast to stay ahead of the pack.

Shenzhen’s speed, however, is also alluring to tech professionals and idealists around the world.

“She said ‘Nah! I couldn’t live in a developed country.”

“I have a good friend, she’s from China, and she just spent one year in Australia and decided to move back to China to join a tech startup,” said China tech journalist Johan Nylander, author of “Shenzhen Superstars.” “I was quite surprised, because she had a visa, she could stay in Australia. I asked her, ‘Why didn’t you stay in Australia?’ She said ‘Nah! I couldn’t live in a developed country.'”

A new frontier like Shenzhen offers golden opportunities to those fast enough to seize them.

Shenzhen sits on the southern coast of China just across from Hong Kong, the former British colony that has more academic freedom than the mainland, and, according to entrepreneur Monica He, better research.

“In terms of multilingual research, I would say Hong Kong is a lot more advanced,” He said. “So I can access a lot more academic resources there.”

Hong Kong research also led to the creation of Shenzhen drone company DJI, which is now the world’s largest. DJI founder Frank Wang began out of his dorm room at Hong Kong University of Science and Technology.

“So this guy, even though he was not good at studying, started creating his own drone,” said Erwin Huang, a veteran of Apple now teaching at HKUST. “And actually he built a team and won the Japanese Robocon competition. So that’s now he learned. His professor became his first investor.”

It’s stories like these that lured Monica He and her startup Duunokid to Shenzhen. To her, this city measures up to Silicon Valley.

“I’ve heard a lot of good things about other startup hubs, like the Bay Area,” He said. “But we believe this will be the next one.”

As does the central government of China. In a bold move, it just gave the great Shenzhen-Hong Kong area a new name: The Greater Bay Area. 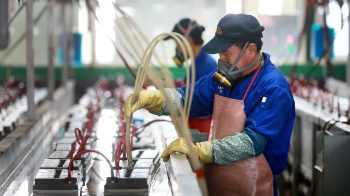 For many Chinese workers, the country’s zero-COVID policy has tested family bonds