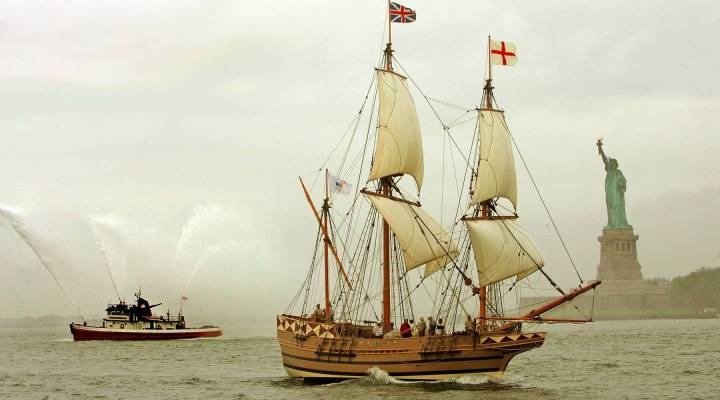 COPY
A fireboat welcomes the Godspeed, a 17th-century replica ship, as it sails past the Statue of Liberty in New York Harbor in 2006. Photo by Mario Tama/Getty Images

A fireboat welcomes the Godspeed, a 17th-century replica ship, as it sails past the Statue of Liberty in New York Harbor in 2006. Photo by Mario Tama/Getty Images
Listen Now

While it might seem like a product of the modern world, the idea of a joint stock company actually goes back hundreds of years. The first joint stock company in England was the Company of Merchant Adventurers, an association of English cloth traders who funded their trading expeditions by selling shares of their company to wealthy landowners. And, according to Simon Targett, co-author of New World, Inc.: The Making of America by England’s Merchant Adventurers, the United States as we know it likely wouldn’t exist if it weren’t for this company.

Until that moment, companies, or rather, groups of merchants, would get together and form syndicates. But this new venture was to be the most ambitious. What the merchants in England wanted to do was raise huge amounts of money. And so they came upon this idea of the joint stock company. And this allowed them to not only have their own investments, but also to invite investments from people who were not actually directly involved in the company — wealthy people, who wanted to speculate.

Now those shares were quite expensive. They were 25 pounds, in those days, two or three times the salary of a laborer. And so, after that, there were a number of companies that were established, trading companies, built on the Mysterie Co. model. Of course, the famous one in relation to America was the Virginia Co. The people that ran it wanted to attract a broader range of people. They slashed the price of the shares in half, and that attracted all kinds of people, not just noblemen, but also artisans, brewers, shoemakers. So in a way, although in the end, the Virginia Co. didn’t raise as much money as some of the other companies, it was hugely successful in almost helping the project of America become very popular.