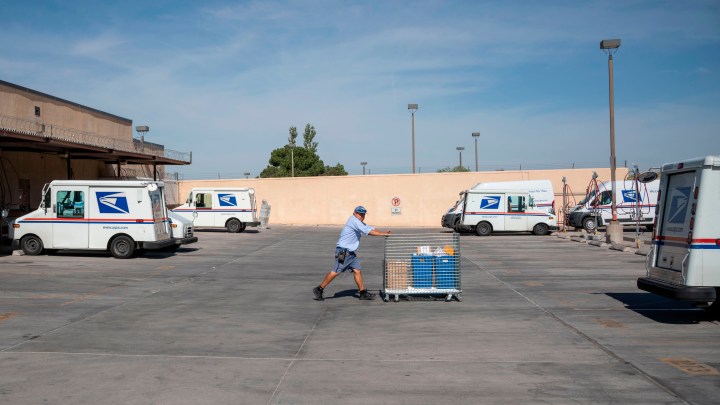 COPY
Cost-saving measures for the United States Postal Service include the closure and consolidation of branches, especially in rural settings that heavily depend on the service. Paul Ratje/AFP via Getty Images

Cost-saving measures for the United States Postal Service include the closure and consolidation of branches, especially in rural settings that heavily depend on the service. Paul Ratje/AFP via Getty Images
Listen Now

Thirty miles of winding, red dirt roads connect U.S. Highway 550 to Torreon, New Mexico. The small community on the eastern edge of the Navajo Nation is home to about 300 people, and to JJ Otero’s jewelry studio. The tiny room on the far end of Otero’s trailer has just enough space for his tools and materials for making high-end silver earrings, turquoise pendants and his signature cuff bracelets with intricate stamp work.

“All these stamps have little designs on the tips of them,” said Otero, who is Navajo and Hopi, while using steel stamps and a small hammer to impress a paisley design onto a rectangular sheet of silver. “When you’re stamping, all you’re doing is displacing metal.”

About five years ago, Otero left his IT job in Albuquerque and moved home to Torreon to care for his aging parents. At first, he wasn’t sure he could support himself as a full-time artist. But by promoting his work on Facebook and Instagram, he’s found clients all over the country.

“I just sent out mailings today,” Otero said. “Some went to Portland, Oregon, others went to Louisiana, Kentucky, Phoenix.”

Getting those pieces shipped isn’t easy.

“For a lot of people, it’s just going outside and dropping it in a mailbox or scheduling a pickup and USPS comes by and whisks it away,” Otero said. “For me, I have to get in my truck and drive a half-hour one-way — one-hour round-trip — to drop those pieces off at the post office.”

And if a customer requests that their piece be shipped by a private shipping company like UPS or FedEx, he has to drive all the way to Albuquerque.

“That’s a two-and-a-half hour round-trip,” Otero said. “I have to lump in other errands like an oil change or shopping for materials to make that worthwhile.”

Since 2007, the United States Postal Service has reported net losses of nearly $100 billion. Postmaster General Louis DeJoy continues to push his controversial 10-year austerity plan to get the agency’s finances in order. It involves the consolidation and closing of certain branches, reduced post office hours, rate hikes and longer delivery windows that would affect what the agency calls the “fringes” of its network.

The Postal Service’s founding mission was to serve rural Americans, according to historian Richard John.

“The Postal Service Act of 1792 rapidly expanded what was then a chain of offices along the Atlantic seaboard into a network that would reach far into trans-Appalachian hinterland. It was an extraordinary commitment,” said John.

That commitment got more cumbersome as the country got larger; it became more difficult to fund when the advent of email and e-commerce tanked Americans’ reliance on first-class mail. But the Postal Service is still required by law to serve even the most rural parts of the country, John said.

“Lawmakers believe the government has an obligation to provide this essential service to everyone. That’s a fundamental principle that is civic in its conception, not economic,” he said.

Johnathan Hladik, policy director with the Center for Rural Affairs, lives in Craig, Nebraska, a town with a population of under 200 people. His neighbors rely on the USPS to receive medication, pay their bills and keep their small businesses afloat.

“Rural communities depend so much on entrepreneurship. When there aren’t jobs, you create those jobs and you need the Postal Service to be there, to be consistent, to be reliable,” Hladik said.

Postmaster General Dejoy’s goal is for the USPS — a current Marketplace underwriter — to find a way to break even. Hladik agrees that the agency’s business model is worth a look.

“It’s really important to steward taxpayer dollars,” he said. “But we know we’re using [the Postal Service,] we know it improves our quality of life, we know we need it for the basic necessities.”

Necessities, like sharing information in the absence of widespread internet access. Twyla Baker, who heads up Nueta Hidatsa Sahnish College on the Fort Berthold Reservation in North Dakota, said her local post office functions like a community center.

“That’s where you’re going to find the notices posted for rummage sales, things of that nature. If there’s a benefit breakfast or somebody’s selling a car, that’s where they’re posting,” Baker said. “It’s kind of a place of coming together.”

Postal service becomes especially vital during election season, Baker said. Mail-in voting is a popular choice among reservation residents who might otherwise drive an hour to their nearest polling place.

“If we were to diminish their ability to vote by mail, then we are essentially cutting a huge portion of the population out,” Baker said.

And in his jewelry studio in Torreon, JJ Otero said any cuts to the already-limited postal service on the Navajo Nation would jeopardize his business model and his ability to live on his homelands.

“I mean, it’s tough enough,” Otero said. “They’re overlooking the fact that poor people need to get mail and to get mail out. Among those poor people are the Indigenous folks that live in areas like here, that rely on [the Postal Service].”

On the surface, Otero’s business is thriving. He’s putting away enough money to start planning to build a sturdier home for him and his parents to live in, and a stand-alone jewelry studio nearby.

“But I have to work two to three times as hard to achieve any kind of success,” Otero said.

Everything connecting Otero to his clients is tenuous — from his spotty internet connection, to the winding dirt roads into town that become impossible after a snowstorm, to the off-reservation post office that could soon become even less accessible.