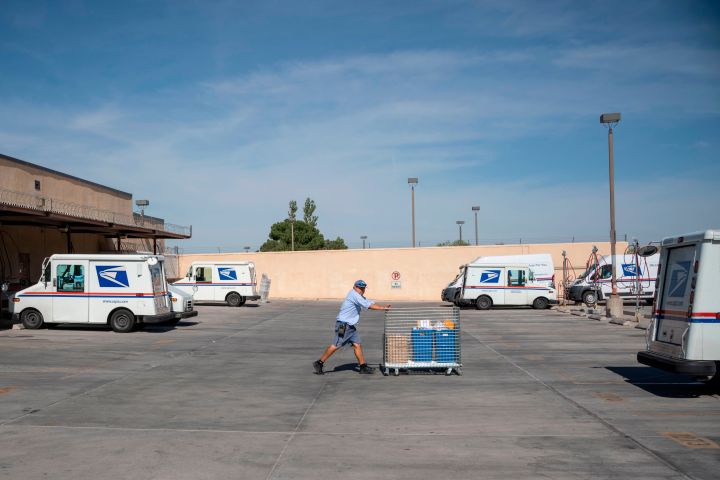 COPY
The federal pension the USPS offers is one part of what makes the job attractive to veterans. Paul Ratje/AFP via Getty Images

The federal pension the USPS offers is one part of what makes the job attractive to veterans. Paul Ratje/AFP via Getty Images
Listen Now

In an about-face, the head of the U.S. Postal Service says he will hold off cost-cutting measures until after the fall election, so opening hours and the blue mailboxes won’t be further reduced, nor will overtime for employees.

The post office is one of the biggest employers in the U.S., and its staff includes a large number of military veterans.

The USPS says it employs over 97,000 veterans. That’s roughly one-sixth of its workforce.

Michael Macho is one of them. He’s worked as a sales and service associate in Kentucky for nearly 17 years.

“I basically managed the window service to the public,” Macho said.

Macho said he spent five years on active duty in the U.S. Army. When he became a civilian, he said the postal service was the best paying job he could find, and he said he’s used a lot of skills he picked up in the military: leadership, multitasking, attention to detail.

“Whether you’re mailing firearms, corrosives, hazardous materials, there’s so many things you have to stay on top of,” Macho said.

Many veterans haven’t served long enough to receive a military pension, said Jeffrey Wenger at the RAND Corporation. He said the federal pension the USPS offers makes the job attractive to veterans.

“I think pension is important, I think people want that sense of stability and security,” Wenger said.

Macho said he was able to count his five years of active-duty time toward his postal retirement.