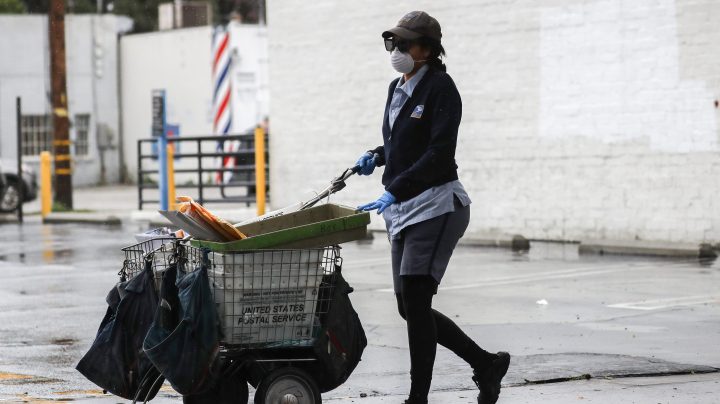 COPY
COVID-19 has caused another sharp decline in USPS' business, and the cost of keeping employees outfitted in gloves and masks is adding to its financial troubles. Mario Tama/Getty Images

COVID-19 has caused another sharp decline in USPS' business, and the cost of keeping employees outfitted in gloves and masks is adding to its financial troubles. Mario Tama/Getty Images
Listen Now

Some lawmakers are warning that United States Postal Service operations could come to a halt as soon as June.

Over the weekend, the Washington Post reported that President Donald Trump had been prepared to reject the $2 trillion COVID-19 stimulus act if it contained a bailout for USPS. Instead, the postal service got a $10 billion loan, which is awaiting approval from the Treasury Department.

That could spell trouble for Americans living in rural areas. People like John Tsitrian, from the little town of Wall, South Dakota, known by locals as the “geographic center of nowhere.”

He gets his medication from the Veterans Administration hospital, through USPS.

He’s worried that if postal services come to a halt “it would require a 100 mile round trip. It would be quite expensive and time consuming.”

Companies like Amazon depend heavily on USPS. In rural areas, it takes care of the so-called “last mile” of the delivery. Tsitrian said that for a lot of Wall’s residents, courier services like FedEx and UPS could be too expensive.

USPS has been in financial trouble for decades, thanks to email, e-bills and e-vites.

Now, USPS said, the coronavirus pandemic has caused another sharp decline in business. And Romina Boccia, an economist with the Heritage Foundation, said there’s also the cost of keeping about 600,000 postal workers safe right now. “It comes down to providing them with masks and gloves, cleaning their vehicles more extensively, all of the things to reduce the likelihood of the spread.”

Legislators have raised concerns about USPS having to shut down as it bleeds money. Cornell University Professor Richard Geddes doubts it will come to that, but he thinks the postal service needs to seize the moment to make major changes. “Look, the postal service’s fiscal model was not sustainable before the virus. Now it’s just collapsed. So let’s bring it into the 21st century. Make it more commercial.”

Back in South Dakota, Tsitrian says he’s been thinking about family memorabilia he has: letters sent to the town of Wall during World War I, the same era when the town itself was born.

He’s worried that like those letters, the post office could become a relic of a bygone era.