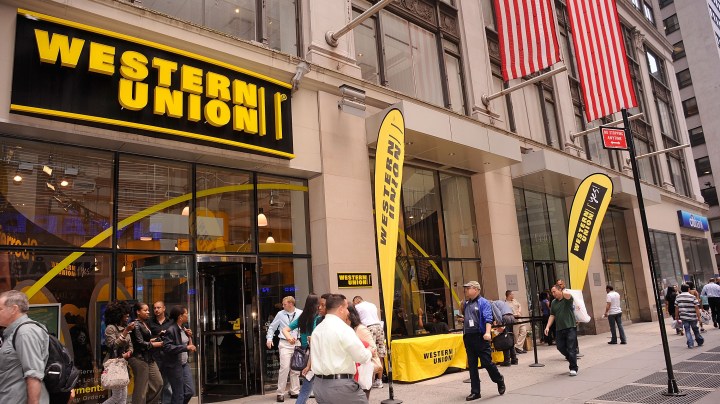 COPY
The Russian invasion has complicated the process of sending remittances to Ukraine through money transfer companies like Western Union. Gary Gershoff/WireImage via Getty Images

The Russian invasion has complicated the process of sending remittances to Ukraine through money transfer companies like Western Union. Gary Gershoff/WireImage via Getty Images
Listen Now

Before Russia’s invasion of their country, Ukrainians living in the U.S. sent more than half a billion dollars a year back home. But with the dire situation on the ground right now, it hasn’t been easy to get cash into the hands of family and friends who need it.

In San Francisco’s Richmond district, in a mixed Ukrainian and Russian neighborhood known locally as Little Russia, Bohdan Vasahan sat in his car on a corner glued to his phone. “I’m basically on social media constantly,” he said, “checking all the updates on the news and videos.”

Vasahan is a contractor, and his hometown is the port city of Odesa in southern Ukraine. Residents there are bracing for a possible Russian assault. His mom and grandma are among them. Vasahan’s been looking for a chance to wire them cash.

“We’ve been communicating about sending that support, but I’ve been told by them that right now, banks are not operating — not fulfilling the transactions. You can’t really do anything right now,” he said.

He’s worried they’ll run out of food or medicine, or won’t be able to afford to get out of there if they need to.

For those with relatives further east in Ukraine, the situation is even more desperate. Yuliya Lopatyeva is from Zaporizhzhia, a city where Russians have reportedly taken control of the nuclear power plant.

“My twin brother live[s] there,” Lopatyeva said in an interview last week. “Our friend[s], my cousins [live there].”

A few days later, Lopatyeva’s brother had a stroke. He couldn’t get medical help amid the warfare and died. She’s been trying to send money for funeral services, with no luck.

Most people in Little Russia depend on one of three companies to send cash home: MoneyGram, Western Union and Ria.

MoneyGram said remittances to Ukraine more than doubled on the day of the invasion but didn’t provide more recent data. The company said it is still providing service in the country. Ria, on the other hand, said service in Ukraine is limited right now.

Nicolas Véron, a senior fellow at the Peterson Institute for International Economics, said that like every business, this one has its own unique supply chain.

“So there are lots of links in that chain. And at this point, all these links may be affected. It’s not just cash,” Véron said. “Everything is difficult in a war zone.”

At the end of that chain, cash itself may be in short supply. And the ability to pick up cash depends on where in Ukraine a person is.

The country’s second-largest city, Kharkiv, has been bombarded for days by the Russians. Some members of Bay Area resident Michael Dvorkin’s family are there. Last week, he said they couldn’t retrieve the money he wants to send.

“We asked the relatives, and they said, ‘There is no point because we can’t get it anyways.’ They cannot go outside because they’re scared of being killed,” he said.

It took a few days, but, Dvorkin said, someone in Kharkiv was finally able to get some money to his family — no banks, no wire transfers, just cash passing from one hand to another as a favor.