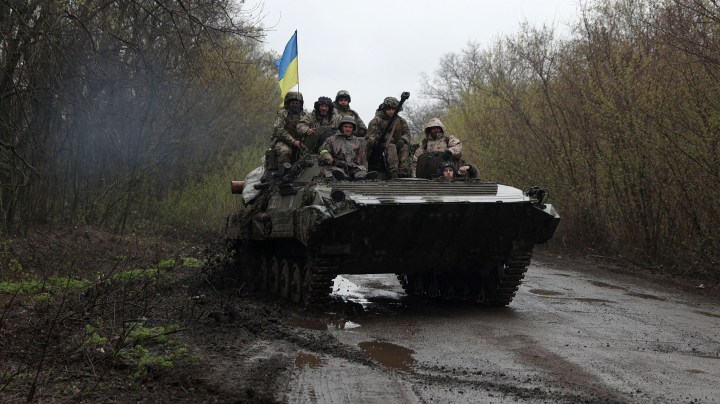 Since Russia’s invasion of Ukraine, the United States has sent more than $3 billion in military assistance to the now war-torn country. On Thursday, President Biden announced an additional $800 million in assistance, on top of aid approved just last week.

But compared to previous aid, there’s something noticeably different in the latest security packages. A difference, Mark Cancian, a retired Marine colonel and senior adviser at the Center for Strategic and International Studies, says indicates a change in how the United States is expecting the war in Ukraine to continue.

“Marketplace Morning Report” host Sabri Ben-Achour spoke with Cancian about the military aid the U.S. is sending Ukraine during this crisis. The following is an edited transcript of their conversation.

Mark Cancian: We have seen a change. Early on, the United States provided munitions and supplies that can be used immediately because the concern was that the Russians might win a quick victory, the Ukrainians were desperately trying to hold back the Russian advance. As a result, these early packages had munitions like the Javelin and like Stingers, which are relatively easy to train troops on, it can be employed relatively quickly — in addition to logistics and supplies, like helmets, flak jackets, night-vision goggles, personal protective gear, that sort of thing. These last two packages include major weapon systems like howitzers and armored personnel carriers, as well as Soviet-era equipment, such as T-72 tanks and Mi-17 aircraft and likely fighter jets. All of these will take some time to get to the Ukrainians, they have to be maintained. And then, in the case of the U.S. equipment, we have to train Ukrainians on it. That’s a process that will take weeks if not months to fully complete. That implies the United States is thinking this might be a long war.

Ben-Achour: Does the fact that these weapons require more training mean we will see Americans on the ground doing that training in Ukraine?

Cancian: Well, we’re not going to see Americans on the ground in Ukraine, we’re going to see Ukrainians on the ground in the United States. The plan is that we will train Ukrainians to operate and maintain this equipment, which will take several weeks, if not months. But we will do that either in the United States, which is most likely, or possibly in some bases in Europe. But the administration has been quite clear that we’re not going to send U.S. forces into Ukraine to conduct this training or to participate in military operations.

Ben-Achour: If this conflict is going to go on for quite some time, I mean, do you think we’re going to see these military aid packages continue with the same pace indefinitely?

Cancian: Absolutely. We had been providing aid at the rate of about $50 [million], $55 million a day. These latest packages increase that to about $100 million a day. I don’t see how we can step back from our support of the Ukrainians given the commitments the administration has made. President Zelenskyy has been emphatic about the need for a continuing flow of equipment and supplies. And I think that’s going to continue as long as the war continues.

Ben-Achour: When we offer weapons in this way, I mean, I imagine they have to get replaced. Does this mean the defense industry is also sort of ramping up?

Cancian: It will. Most of this equipment will need to be replaced and Congress has provided funds to do that, I expect that they will provide more as the war goes on and more equipment is transferred. It will take some time for that to occur. Just to use one example, the Javelins — we’ve transferred something like 7,000 Javelins, maybe a third of our inventory to Ukraine. We’ve only been building Javelins at the rate of about 1,000 a year, now we can ramp that up, but it’s going to take several years to replace the inventory. For other elements, we can probably replace them more quickly. The howitzers, for example. But there are some other elements that can’t be replaced very quickly, the Stingers, for example, are no longer in production. So we’re gonna have to wait until the next version of that comes out. So bottom line, yes — all of this will be replaced but it may take several years to do that.

Cancian: It does. I think the problems are not as severe as in the civilian sector because the military had some awareness of supply chain vulnerabilities and was trying to make its supply chains more resilient, even before the pandemic. But there will be some slowdown. I know that everybody’s competing for chips and the military will be part of that. So there will be some slowdown but I think the military, you know, has some resilience against that.