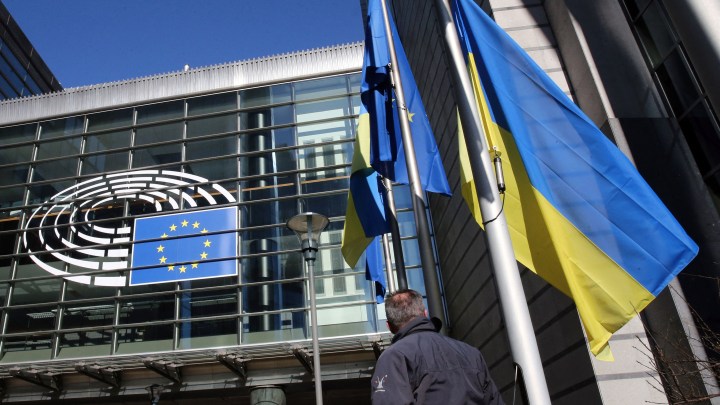 COPY
The Ukrainian flag at the European Parliament building in Brussels. The European Union's ban on the majority of oil imports from Russia is too weak to satisfy Ukraine and some EU member nations. François Walschaerts/AFP via Getty Images

The Ukrainian flag at the European Parliament building in Brussels. The European Union's ban on the majority of oil imports from Russia is too weak to satisfy Ukraine and some EU member nations. François Walschaerts/AFP via Getty Images
Listen Now

The European Union has just launched a new package of sanctions against Russia as punishment for the invasion of Ukraine.

But it took weeks of wrangling between the member states to complete and, according to the BBC, was dismissed by the Ukrainian government in Kyiv as “too little too late.”

A former Ukrainian minister, Ivanna Klympush-Tsintsadze, told Britain’s Channel 4 News that “Europe is losing its unity over sanctions. That’s a positive sign for the Kremlin and very worrisome for the future of Europe itself and definitely for Ukraine.”

The key piece of the new package — and the most controversial — is an immediate ban on around two-thirds of the Russian oil imported into the EU. This is a tough measure in itself, but it failed to match up to the total embargo demanded by Ukraine and some other EU members, like Poland and the Baltic states.

They believe that because the EU has, reportedly, been pouring more than $2 billion a week into the Kremlin’s coffers in payment for Russian oil since the start of the invasion, this money is fueling President Vladimir Putin’s war machine and it must be stopped immediately and in its entirety. Ukrainian Foreign Minister Dmytro Kuleba accused any European country opposing the embargo of being “complicit in the crimes committed by Russia in the territory of Ukraine.”

But landlocked Hungary, which relies on oil piped from Russia, vigorously opposed a complete ban and forced the EU to block only seaborne supplies of Russian crude. Hungary’s leader, Viktor Orban, said the effect of the ban would be “like dropping an atomic bomb on our economy.”

“Hungary is very dependent on Russian oil, and its refinery is configured to deal only with Russian crude,” said Ian Bond, director of foreign policy at the Centre for European Reform in London. “But Orban also has a less respectable reason for opposing the ban. He has a close relationship with Vladimir Putin. He’s made no secret of his admiration for the strongman approach that Putin takes,” Bond added.

The Ukrainians accused the EU of strengthening Putin’s hand by not imposing a total oil embargo. They have other worries as well, saying the French have been privately urging them to make concessions on Ukrainian sovereignty so that Putin can save face and end the war.

There’s enormous pressure to engineer an exit from this crisis, said Nick Redman, director of analysis at Oxford Analytica. Across the EU, concerns about the war’s economic repercussions are growing.

“In France and in Italy and in Germany, a sense has developed in the past two weeks that, given the European cost of living crisis, an extended conflict is just too damaging,” Redman said.

This may explain why Germany, according to German media reports, has not delivered — as promised — any heavy weapons to Ukraine since the end of April. So is European resolve to defeat Putin waning?

“I’m not sure we can say ‘waning’ yet,” Redman observed. “It’s certainly having a wobble at the moment.“

The EU insists that its ban on two-thirds of Russian oil imports will hit the Kremlin hard and that, due to separate German and Polish commitments, 90% of those imports will be blocked by the end of the year. But as they lose ground to the Russian invaders, the Ukrainians clearly feel that the political landscape is shifting and European support is beginning to soften.