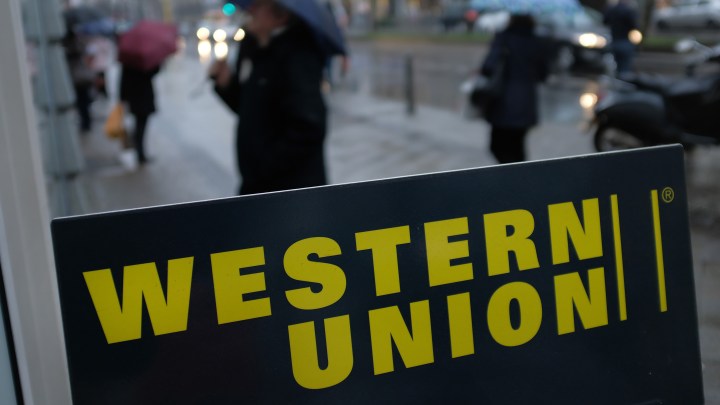 COPY
Western Union is now allowing money sent to Ukraine to be picked up in neighboring countries. But because of steep costs, some Ukrainians abroad have found alternatives to usual remittance services. Sean Gallup/Getty Images

Western Union is now allowing money sent to Ukraine to be picked up in neighboring countries. But because of steep costs, some Ukrainians abroad have found alternatives to usual remittance services. Sean Gallup/Getty Images
Listen Now

Less than a week into Russia’s invasion of Ukraine, I met Yuliya Lopatyeva on the main drag of San Francisco’s Ukrainian enclave, Geary Street. She was distraught, worrying about family and friends scattered across her homeland.

“In Zaporizhzhia, in Kviv. Every part — Lviv,” she said, naming cities through the country.

She sent $100 to her twin brother by MoneyGram. It took three days to reach him, and she couldn’t use her Ukrainian bank at all.

“It doesn’t work. I can’t do any payments. I can’t send money,” she said at the time.

Her brother died of a stroke a few days later. She was hardly the only Ukrainian living abroad, scrambling to send money back home once the war began. Some remittance companies limited service to Ukraine or capped transfers. But six months into the war, sending money to Ukraine appears to have become easier.

After their initial trouble, Yuliya and her daughter, Polina, scoured the internet for alternatives. On a recent phone call, Polina said they stumbled across a service called Wise.

“I honestly just Googled and I saw the website is pretty much secured,” Polina Lopatyeva said. “There’s two-factor verification. You can connect it to your bank.”

She said Wise ended up being faster and cheaper than the remittance services and banks they’d long relied on. “So right now the transfer to Ukraine got actually easier.”

Remittances to Ukraine spiked as the invasion got underway. In May, the World Bank estimated they would rise more than 20% this year. But Susan Pozo of Western Michigan University said that, so far, she’s not seeing that in data from the National Bank of Ukraine.

It shows remittances for the first half of this year at $6.5 billion. For the same period last year, it was nearly $7 billion.

“So you don’t see a substantial increase. You see, in fact, a little decrease,” Pozo said.

The war has been driving people in and out of Ukraine, and Pozo said that has changed the flow of money in and out of the country.

“You have a lot of family separations,” Pozo said. “The men have to stay, but the women and the children have left. You have 6 million refugees.”

That means some remittances that would have gone to Ukrainians in Ukraine are probably now going elsewhere, said Dany Bahar of Brown University.

“They’re going to family members who have settled in Poland and Moldova, for instance,” Bahar said. “So those are numbers that officially are not remittances to Ukraine anymore, they’re now remittances to Poland or Moldova, but they are going to people who a few months ago were living in Ukraine.”

Major players in the remittance industry have responded to all the turmoil, according to Ina Ganguli of the University of Massachusetts Amherst.

“During the war, it seems like a lot of these companies have made changes to make it easier,” she said.

Western Union, for one, is now allowing remittances sent to Ukraine to be picked up in neighboring countries for the first time. And Ganguli said Ukrainians seem to be paying more attention to the cost of remittances. Fees in the first quarter of 2022 ranged from about $4 to $25 per transaction, according to a World Bank tracker.

“What you see is it’s really expensive, and Ukraine actually has some of the highest fees associated with it.”

Between the high costs and the fact that some services were suspended, delayed or capped early in the war, Amherst College’s Caroline Theoharides said she’s not surprised that some Ukrainians abroad have found alternatives.

“There’s a market there, but the market wasn’t working very well,” she said.

And Ukrainians like Yuliya and Polina Lopatyeva aren’t sure they’ll go back to sending money to those who need it using the same methods they used to.