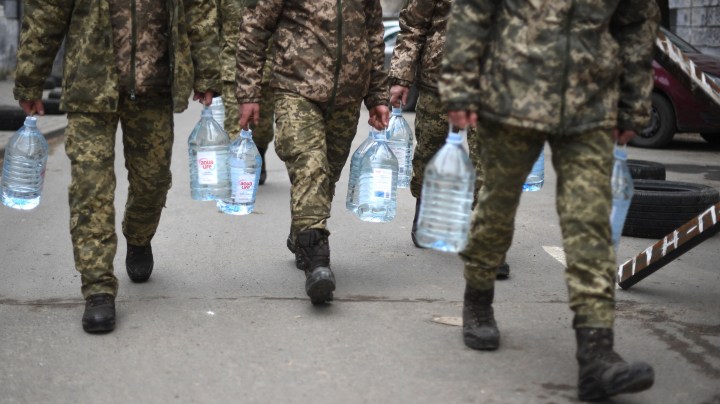 COPY
Ukrainian soldiers carry water near a base in Lviv. The government has been making its account information public to help it raise funds. Daniel Leal/AFP via Getty Images

Ukrainian soldiers carry water near a base in Lviv. The government has been making its account information public to help it raise funds. Daniel Leal/AFP via Getty Images
Listen Now

As Russia rolled into Ukraine, the Ukrainian government asked the world for help, and people in San Francisco’s main Ukrainian neighborhood heeded that call.

I then asked him how he tried to do that. “I’m going to Chase Bank and show that account number from government. But that’s not work.”

The Ukrainian government has been sharing its bank account information for weeks on social media and television. But international money transfers can be tricky.

Slivnyak called up a friend, Ihor Shchurikov, who had some advice: “So, people say it’s a little bit easier with Wells Fargo. Whatever is shown on Ukrainian TV, they show those routing numbers, the account numbers — Bank of America doesn’t support that. It also requires a SWIFT code and so on.”

Helping individuals put up money to defend against an invasion isn’t something most major U.S. banks have much experience with. Plus, SWIFT, the messaging system involved in these kinds of wire transfers — a system from which Russia has been banned — can be pretty clunky.

SWIFT “was designed 50 years ago, and, you know, just has a lot of limitations to it,” said Lisa Ellis, a partner at equity research firm MoffettNathanson. “The primary issue most likely occurring, in this case, is an issue of just account verification.”

In other words, banks’ legal requirement to make sure the money is actually going to the Ukrainian government and that it isn’t being used for anything illegal.

“It’s put in place to restrict the ability of criminal enterprises to move money,” Ellis said.

“To my knowledge it is the first time we’ve sort of seen an active crowdfund campaign conducted by a nation-state, principally to receive cryptocurrency,” he said.

There are pros and cons to doing this, Reiners added. “Crypto is easier to send across borders without the need for any ‘know your customer’ checks or any of that stuff, so I can see the appeal on both sides. But there’s just a lot of risk involved.”

For example, a fraudster could pose as the Ukrainian government. For people who want to support Ukraine, donating to humanitarian organizations is a safer bet, Reiners said. It’s also best to leave funding Ukraine’s army to other nation-states, he added.