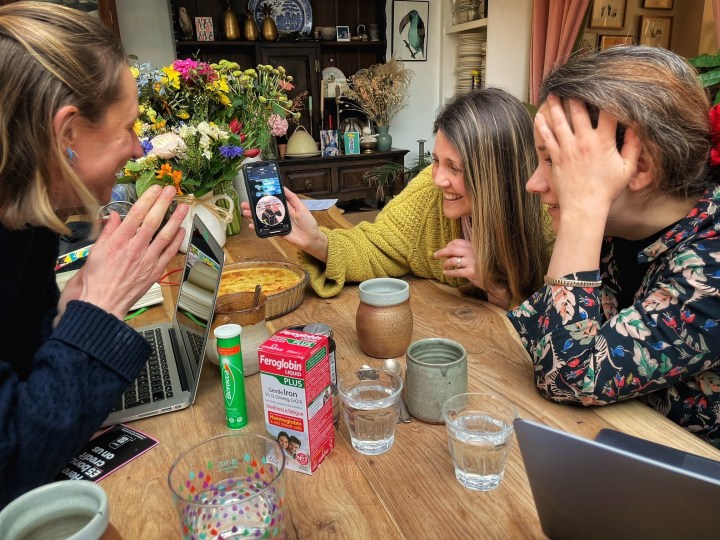 COPY
Olia Hercules, an award-winning cookbook author from Ukraine who runs a kitchen in East London, shows video from her brother Sasha to her friends. Sasha is in Ukraine, and Olia sent supplies to him to help him survive the war with Russia. Victoria Craig / BBC

Olia Hercules, an award-winning cookbook author from Ukraine who runs a kitchen in East London, shows video from her brother Sasha to her friends. Sasha is in Ukraine, and Olia sent supplies to him to help him survive the war with Russia. Victoria Craig / BBC
Listen Now

War in Ukraine has stretched into its third week. As the fighting continues people across the country prepare for the possibility of a long, drawn-out conflict with Russia.

Some, though, are determined to help their loved ones survive – physically, emotionally, and financially.

A kitchen in East London, where a pot of tea is now being prepared, belongs to chef and cookbook author Olia Hercules. It’s seen it all: Recipe testing for award-winning cookbooks and countless family meals.

Two weeks ago, the cookware was stowed away. And now, only a forgotten pot of food lingers on the stove. The optimism once plentiful in this chef’s haven has melted away.

Because now, this kitchen is a war room.

For the past two weeks, Hercules has been trying her best to man her battle station. She was born and raised in Ukraine, but has lived the past 20 years in London.

While her immediate family resides with her in the U.K., her extended family – including her parents and brother Sasha – are all back in southern Ukraine.

“My brother messaged me, and he said that he’s not going to leave, that the situation is extremely desperate, and that he needs to go and join the territorial defenses,” she said. “But he realized that when you join, you’re only given a rifle. And that’s it. There was no protective gear, there was no helmets, no protective vests, not even knee pads, no radios, you know, nothing.”

That conversation spurred Hercules into action. In just two days, she collected nearly $150,000 to buy as much protective gear as she could.

Hercules and her team of friends and volunteers found a complex route to getting supplies to her brother and his team. She told me she hoped it would arrive the day we were speaking.

And, as if on cue, her phone buzzed.

Then, she screamed. Sasha got the supplies she sent.

“Honestly to hear his voice right now, he’s just like ‘Yeah! It’s so amazing. We’re going to be OK!'”

It’s a moment of elation, but for Hercules, this victory is only the start.

While her priority now is to continue sourcing and sending to supplies to her family and friends back home, Hercules also wants to help her country rebuild – not just physically but psychologically from the horrors of war.

“My aim is to help communities, especially where I already have family and friends. So for example, my hometown … or there’s also a village in Transcarpathia, where I normally take people for my food tours where we know people on the ground who are already doing loads of charitable things for children,” she said.

“So my long-term plan is to collect money to raise money to build cookery schools for especially for kind of guests, teenage children, posts, post school, so they can learn a skill, so they will be able to make money for themselves. And also food is so incredibly therapeutic.”

On her Instagram, Hercules describes the mental toll this is all taking. She’s preparing to release her fourth cookbook in July – fittingly subtitled “recipes to comfort and connect,”, but on this feed, she writes, “instead of teaching how to make dumplings, I am searching for army boots and giving interviews about my family to help raise awareness and influence the situation.”

In addition to her efforts to help protect her brother, Hercules helped launch an appeal aimed at her food community called CookForUkraine. It encourages people all over the world to try their hand at cooking or baking Ukrainian dishes, but more importantly, she says, gathering around the table to educate each other about the war and strategize ways to help those affected. The movement has so far raised more than $230,000 to benefit the children’s charity, UNICEF.

Olia said though she can’t right now focus on food or cooking, she hopes to one day soon fire up the oven, put on her apron, and leave the fog of war behind.