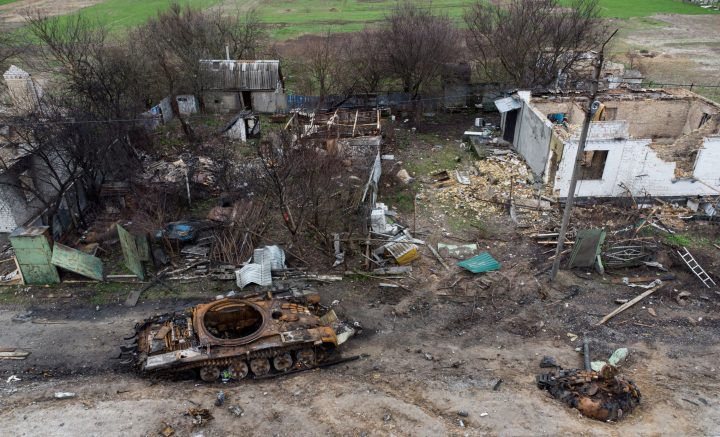 COPY
The wreckage of a tank is seen next to destroyed residential houses in the village of Zalissya, northeast of Kyiv on April 19, 2022. GENYA SAVILOV/AFP via Getty Images

The wreckage of a tank is seen next to destroyed residential houses in the village of Zalissya, northeast of Kyiv on April 19, 2022. GENYA SAVILOV/AFP via Getty Images
Listen Now

The Biden administration has adjusted immigration rules to allow for more Ukrainians to apply for temporary protected status in the U.S. Ukrainians who entered the U.S. by April 11 would qualify, which covers about 57,000 people, according to government estimates. The total number of Ukrainians who have fled the Russian invasion of their country is approximately 4.9 million, according to the United Nations. Most of them have gone to other countries in Europe.

One of them is Mariana Abrahamets, who fled to neighboring Poland. There, she’s spending her time trying to help soldiers back home.

As she recalls, just getting to Poland safely was an ordeal. “I was woken up by a phone call, and I was told that the war started,” she said. “We traveled by car … myself and my kids had to live on our car for three days and three nights in order to be able to cross the border to Poland.”

To hear her story, click on the play button above.