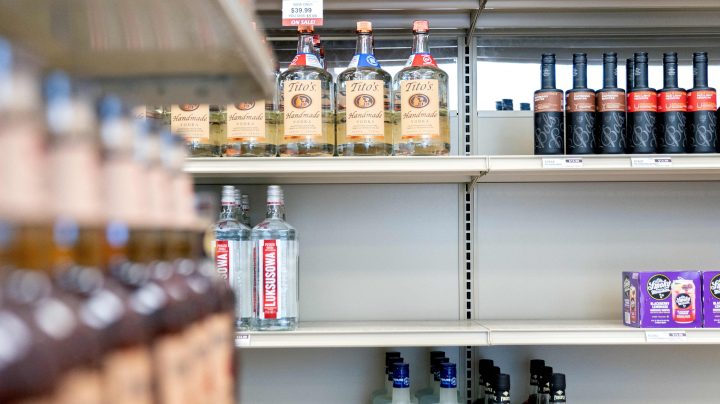 COPY
An empty space in a Virginia store where Russian vodka used to sit. The beverage will no longer be sold at state-controlled stores in Virginia following Russia's invasion of Ukraine. Other liquor stores around the country are joining the boycott. Stefani Reynolds/AFP Getty Images

An empty space in a Virginia store where Russian vodka used to sit. The beverage will no longer be sold at state-controlled stores in Virginia following Russia's invasion of Ukraine. Other liquor stores around the country are joining the boycott. Stefani Reynolds/AFP Getty Images
Listen Now

Russia’s prime minister said Tuesday that the country will seek to temporarily stop foreign investors from selling Russian assets. It’s a move to stem the exit of Western businesses.

A growing number of businesses have been cutting ties or at least trying to distance themselves from Russia as fighting continues to escalate in Ukraine.

Energy giant Shell joined BP in pulling investments out of Russian energy companies. Automakers including Daimler Truck and General Motors have suspended business with the country, and Hollywood studios have canceled movie releases. Pension funds are weighing calls to divest from Russian assets, and some liquor stores are even boycotting Russian vodka.

There have been large-scale repudiations of countries by the global business community before, like the divestment campaign to protest apartheid in South Africa. But this feels different, said Gary Hufbauer at the Peterson Institute for International Economics.

“It’s, it’s really much bigger and much faster,” he said.

While South African divestment took decades, this exodus has happened in a matter of days and from a starting point of much deeper connections, especially for European companies, Hufbauer said.

“They’ve seen it as a very promising market,” he said. “Russia was the place to invest in.”

Companies leaving Russia could be worried they’ll get caught up in sanctions or that the Russian government could seize their assets. But for many, these decisions seem to go beyond business, said Nikos Tsafos with the Center for Strategic and International Studies.

“We’re seeing European companies be willing to say, ‘I’m done, I’m out, I’m willing to write off the whole thing,'” Tsafos said. “I think it just speaks to the psychological impact of this war.”

Of course, he said, there is a risk once firms pull out; they might never be able to get back in.

But for many companies, the risk of alienating the public at home is probably greater, said Daniel Korschun, a marketing professor at Drexel University.

“They know that it’s something that their customers and employees care really deeply about,” he said.

Korschun said expectations for companies to respond to world events have never been higher, and the more that do, the more pressure builds on other business leaders.

“They’re asking themselves, ‘Do I want to be the person who didn’t do something?'” Korschun said.

At least in the case of Russia, he said, there’s a much broader consensus than on the domestic social and political issues companies are now expected to weigh in on.