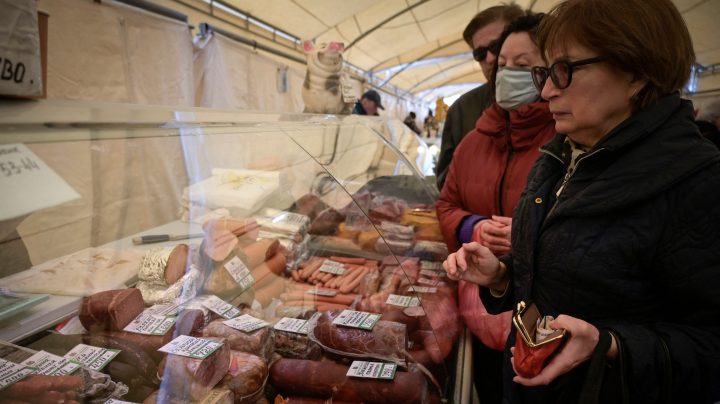 European Union energy ministers held emergency talks Monday about their purchases of Russian natural gas. The previous week, Moscow cut off supplies to two member states, Poland and Bulgaria, because they refused to pay for the gas in rubles. Fears are growing that Germany, Europe’s economic powerhouse, could be terminated next.

But while Europe frets about this latest economic repercussion caused by Russia’s war on Ukraine, what of Russia itself?

Oil and gas fund up to 50% of the Russian budget. Is President Vladimir Putin killing his golden goose and battering the Russian economy?

Putin has shrugged off the prospect of parting company with Europe, his best natural gas customer. But Ole Hvalbye, an energy analyst with the SEB bank in Oslo, Norway, said this would be, for Russia, a very painful divorce.

“You can think about this as a sort of 25- to 30-year-old marriage, you know. These are really long-term contracts. It takes time to build the infrastructure for gas supply. It’s a massive investment,” he said.

Doubling the existing Russian gas pipeline network to China would take eight years, cost billions and still cover less than half the lost sales to Europe, Hvalbye estimated.  Then, there’s the damaging psychological effect of Russia cutting off supplies to Poland and Bulgaria.

“Russia has, sort of, ruined their reputation. And there will not be many countries going into these new long-term contracts with them,” he said.

The reputation for unreliability might also affect long-term contracts to supply crude oil and oil products, which are Russia’s biggest export. They’re worth almost $200 billion a year.

So, has Putin’s war been an economic disaster for Russia? The immediate financial cost has certainly been enormous, according to Tim Ash, senior strategist at BlueBay Asset Management in London.

“It comes to something like $1.4 trillion of impact on Russia,” Ash said. “That’s a huge amount of money. It’s about $8,000 per head of the Russian population.”

That figure takes into account the halving of the Russian stock market’s value, the freezing of assets controlled by the central bank and Russian oligarchs, and Western sanctions’ overall effect on economic activity. The sanctions are likely to continue as long as Putin remains in power.

This isn’t just a Western perspective. Russia’s central bank surveyed more than 13,000 businesses across the country, and, as pointed out by Elina Ribakova, deputy chief economist at the Institute of International Finance, the results were dire.

The institute is forecasting a 15% plunge in Russia’s gross domestic product this year. Unemployment is expected to skyrocket, especially since more than 700 multinational companies are pulling out of Russia and will be shedding employees as they go.

“It will take a few months for them to withdraw, and that will also weigh on the economic outlook,” Ribakova added.

The departure of so many international companies will also deliver a devastating blow to Russian industry. Nicholas Redman, director of analysis at Oxford Analytica, a political and economic consulting firm, pointed to the automotive sector as a possible casualty.

“Russia over the past 30 years has really built up quite a large domestic car industry. A lot of production has been located in Russia. All the world’s biggest car manufacturers are there, but they’re all headed for the exit. So that’s a significant problem over the longer term: How does Russia replace that Western investment and international expertise in logistics and design?” Redman said.

With this economic calamity unfolding across Russia, one might expect support for Putin and his war to waver. But although domestic opinion surveys have to be treated with skepticism, Redman said all the other indications suggested that support for the Russian leader and what Putin calls the “special military operation” in Ukraine remains solid.

“Right now, it doesn’t look like Putin’s grip on power is in any way challenged,” Redman said.

And it may not be for some time. Whipped up by the Kremlin’s propaganda machine against NATO and the West, the Russian people seem prepared to endure quite a lot of economic pain.