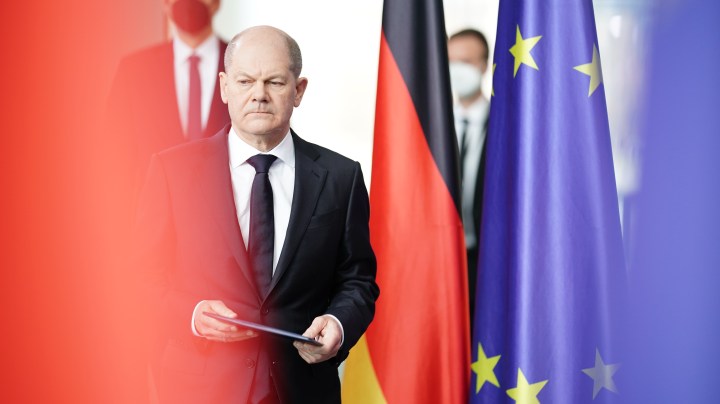 The European Union has announced its toughest-ever sanctions against Russia over the invasion of Ukraine.

The bloc, in coordination with the United States and the United Kingdom, imposed measures ranging from a ban on Russian flights through European airspace to a freeze on the foreign-held assets of the Russian central bank, which should make it more difficult for President Vladimir Putin to dip into his war chest — $630 billion worth of reserves.

The EU also locked some key Russian banks out of the SWIFT international payment system, hobbling the ability of Russian companies to do business abroad.

The measures became possible when Germany — the EU’s economic superpower — dropped its opposition to some of the new sanctions.

It was an extraordinary about-face for NATO’s least belligerent member state, which also confirmed that it was sending lethal weapons to Ukraine and announced a dramatic increase in its own defense spending.

At an emergency weekend session of the German parliament, Chancellor Olaf Scholz unveiled a one-off $113 billion cash injection into the German army and pledged what NATO has been urging Germany to do for years: to raise annual military expenditure to more than 2% of gross domestic product.

The pledge triggered a standing ovation in parliament, which suggested that a seismic shift has occurred in the German political landscape where, for obvious historical reasons, there has long been a widespread repugnance for militarism.

But Russian aggression in Ukraine, the heroic resistance of the Ukrainian leader and his people, and the bravery of thousands of anti-war protesters in Russia seem to have persuaded many Germans that military force is necessary to defend and uphold their values.

Speaking on the United Kingdom’s Channel 4 News, Viola von Cramon — a prominent member of the once-pacifist Green Party — welcomed the decision to ship lethal weapons to Ukraine in no uncertain terms.

“I think this was the right signal to Putin that we need to kick his ass,” von Cramon said.

The unexpected pugnacity is not confined to the military arena. Scholz also dropped his opposition to the much tougher economic sanction of excluding some key Russian banks from the SWIFT international payment system.

David McAllister, the German member of the European Parliament for the opposition Christian Democratic Union party, welcomed the government’s move, saying that “this will hit the Russian economy hard.”

The trouble is it could also hit the German economy, as the Germans might now struggle to make payments for the Russian natural gas on which, per Matt Oxenford of the Economist Intelligence Unit, they so heavily rely.

“Germany is, among West European economies, probably the most dependent on Russian natural gas, getting 55% of its gas from Russia,” Oxenford pointed out.

Germany does have some reserves, and warmer spring weather is approaching. That means the country won’t freeze or grind to a halt, said leading German business guru Daniel Stelter, head of a think tank called Beyond the Obvious. Yet, that is.

“I think the worst would come in the next winter, not this winter. We have a few months’ time to secure other sources, to diversify away from Russian gas,“ he said.

Germany now plans to build its first two liquefied natural gas terminals, so it can buy much more supply from the United States, Qatar and elsewhere. But analyst Oxenford said that will take a lot longer than a few months.

“The pipeline system isn’t something that can be easily replaced in short order,” he said. “It’s put them in a very difficult situation, very difficult for the German economy, which is already underperforming many of its eurozone partners due to the lingering disruptions caused by the pandemic.”

Economic anxieties help explain why Germany had been so reluctant to step up the pressure on Putin.  But at the emergency weekend session in parliament, Finance Minister Christian Lindner told lawmakers that the toughest sanctions were now necessary even though they could hit the German economy hard.

“We are ready to carry the cost of tougher action because that is the cost of freedom,” Lindner said.