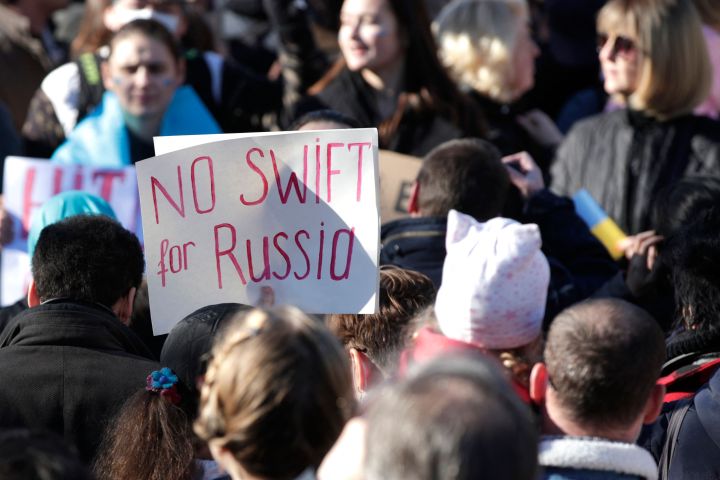 COPY
A protester holds a placard during a rally against Russia's invasion of Ukraine, at Place de la Republique in Paris, on Febr. 26, 2022. GEOFFROY VAN DER HASSELT/AFP via Getty Images

A protester holds a placard during a rally against Russia's invasion of Ukraine, at Place de la Republique in Paris, on Febr. 26, 2022. GEOFFROY VAN DER HASSELT/AFP via Getty Images
Listen Now

The U.S. and Europe over the weekend moved to cut many Russian banks out of the global financial system by stopping its access to what’s called the SWIFT global payment system, which is based in Belgium. For more on this, “Marketplace Morning Report’s” David Brancaccio spoke with Emily Kilcrease, a senior fellow at the Center for a New American Security. Below is an edited transcript of their conversation.

David Brancaccio: Let’s start with restrictions on Russia’s Central Bank, not just any bank, but the central bank. International sanctions are not meant to completely shut it down — but what’s the strategy?

Emily Kilcrease: Russia has been, since 2014, trying to sanctions-proof its economy. And it’s been doing that, in part, by building a massive stockpile of foreign reserves. It’s created this idea of “Fortress Russia” that can withstand any sort of Western sanctions. So, by imposing the central bank sanctions, doing so with all G7 member economies, the allies are really taking a direct hit on this idea of “Fortress Russia” and impeding the ability of Russia to use those foreign currency reserves to mitigate the impacts across its economy of all of these sweeping sanctions that have been imposed over the last week.

Brancaccio: Tell us about the SWIFT system. There was a lot of division in 2014, with Crimea, about using this international banking plumbing to exert pressure on Russia. But the decision over the weekend was, “We’re going to use this” — at least in part.

Brancaccio: And cutting off these banks from SWIFT is a measure that could be felt by everyday Russians?

Kilcrease: Absolutely. I mean, all of these measures will be felt by everyday Russians. I think the consequences are only going to get harsher, as the impact of these measures is felt more broadly, with inflation within Russia, with the GDP dropping. The specific measures will have an impact, but also kind of this accumulated effect is going to start to be really painful soon.

Brancaccio: Now, the Russians have been thinking about this, especially after Crimea in 2014, and there was some move to perhaps set up at least internally within Russia, a SWIFT-like system of their own.

Kilcrease: That’s right. I mean, they’ve been preparing for this moment. And that may help them mitigate the impact to a certain extent. But keep in mind, it’s SWIFT as well as the direct sanctions on the banks. So they might be able to move some money around within Russia, or perhaps between Russia and China. But they are essentially cut off from the international financial system.

Brancaccio: But if Russia and let’s say, China are looking at this and thinking with a longer-time horizon, the move would be to rethink the SWIFT system, their participation in it, maybe set up an international alternative.

Kilcrease: Clearly, there are some long term incentives towards that sort of thinking for Russia, and certainly for China. China is going to be watching all of this with some level of concern. It’s possible that that’s going to happen, but it won’t be set up anytime in the near future.

Brancaccio: There’s been some discussion about whether Russia might be able to use digital currency — crypto — to enact transactions outside the SWIFT system. What’s your take?

Kilcrease: They will be able to use it a little bit. I mean, this is another area where … can it be used for sanctions evasion? Probably, but nowhere near at the scale of the level of assets being frozen. And so if we do see that sort of sanctions evasion through crypto, I would expect for Treasury to be keeping an eye out for that and sanctioning those exchanges. But it is important to keep in mind the scale here, it would be really difficult to essentially launder crypto through these sorts of exchanges at the scale of the assets that are being frozen right now.

Brancaccio: Back in 2014, when there was discussion of, what’s the word now, “de-SWIFTing” Russia, Russia indicated that doing so would be seen as an act of war. This is not a trivial step that the U.S. and its European allies and others took over the weekend to remove Russia’s banks from this system.

Kilcrease: Nothing we’re doing right now on the economic side is trivial, to be candid. This is all significant. This is all going to hurt. Russia’s not going to like any of this. But keep in mind, we are reacting to Russia’s decision to start a war. And so we’re not expecting that Russia is going to like it, but we didn’t start this.