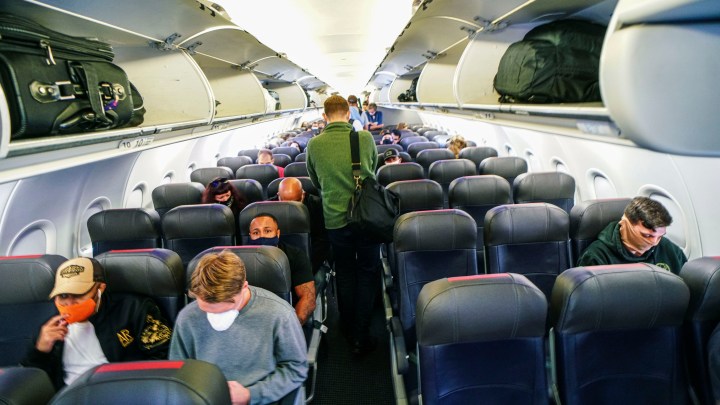 A union representing Southwest Airlines flight attendants is pushing back against the airline’s plan to resume serving alcohol later this month, saying that it could exacerbate “air rage” incidents on planes. Last week, the CEO of Delta Air Lines called for a national no-fly list for unruly passengers.

“Compared to 100 to 200 in a typical year,” said Lindsey Roeschke, travel and hospitality analyst with the research company Morning Consult.

According to the FAA, over two-thirds of reported incidents involved disputes over face masks.

As long as the mandate to wear them exists, “we’re probably going to continue to see these air rage incidents happen, more often than in non-pandemic times,” Roeschke said.

Some flight attendants are concerned that the return of alcohol on board will make passengers even more unruly.

Taylor Garland, with the Association of Flight Attendants-CWA, said the union’s members are already strained trying to tell people to put their masks on.

“And when you introduce alcohol and people may become tipsy or inebriated, that makes the flight attendant’s job that much harder to get passengers to comply.”

Garland’s union has called for airport bars to restrict the amount of alcohol passengers can drink before boarding. It also calls for a no-fly list of disruptive passengers.

“So that people who are either fined by the FAA or who may face criminal charges from the DOJ are ultimately banned from flying at least for a certain period of time,” Garland said.

“What Delta is saying is, ‘If I ban somebody from Delta, that person shouldn’t become another airline’s problem,'” said Henry Harteveldt, a travel industry analyst at Atmosphere Research Group.

Getting the government involved in banning unruly passengers is likely to raise civil liberties concerns. Passengers would need some form of redress, Harteveldt added.

But overall, airlines are looking for ways to strengthen their hand, per aviation analyst Samuel Engel at the consulting firm ICF.

“Inside the cabin, you want to be able to say that my rules are law,” he said.

Engel also said that airlines also want to show employees that they have their backs.