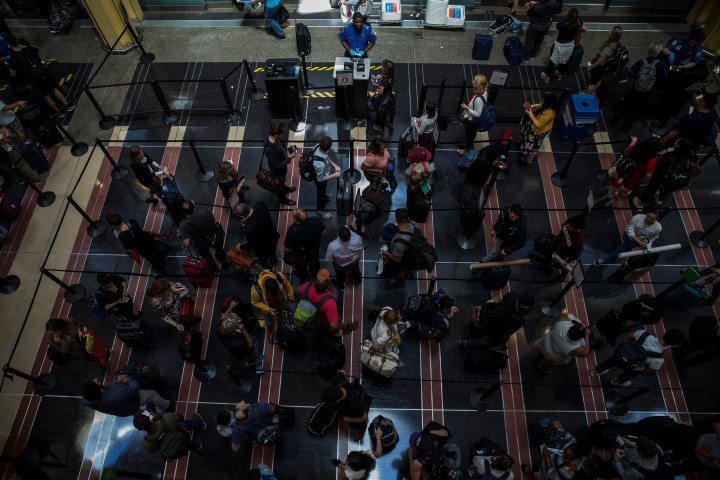 COPY
Travelers wait in line to go through a security checkpoint at Reagan National Airport in Arlington, Virginia, in May. Zach Gibson/Getty Images

Travelers wait in line to go through a security checkpoint at Reagan National Airport in Arlington, Virginia, in May. Zach Gibson/Getty Images
Listen Now

Airlines are carrying an average of 2.51 million passengers per day through the Labor Day holiday, according to their trade association. Airlines for America said a record 17.5 million people will fly during the Labor Day holiday period, which ends Tuesday. That’s without Boeing’s troubled 737 Max jet, which is still grounded. And, over the weekend, United and American airlines announced they’ll keep the plane off their schedules until December, affecting the busy holiday flying season.

“A lot of it comes down to flight testing,” said Richard Aboulafia, an aviation analyst at Teal Group. “And of course getting all of the pilots that are invited to provide input, comfortable.”

A big question is how much pilot training the FAA will require in flight simulators. Aboulafia said there are fewer than 20 simulators for the 737 Max. With all of this uncertainty, airlines are just taking the Max off their schedules, which means extra scrambling for them during the holidays.

To make up for the grounded Max, airlines will divert planes flying into smaller, regional airports to more popular hubs. Plus, airlines will continue leasing older aircraft. But if there aren’t enough planes, ticket prices could go up over the holidays. And if Grandmother’s house is off the beaten path:

“It will be more difficult on some of those more regional routes to find a seat on a plane or get a great deal price because there will be lower capacity,” said Hayley Berg, an economist at the flight app Hopper.

Berg said you could pay 25% more than you did last year for a flight from say, Los Angeles to Pittsburgh. The upshot? You might have to fly at a different time or date than you planned to get the best fare.