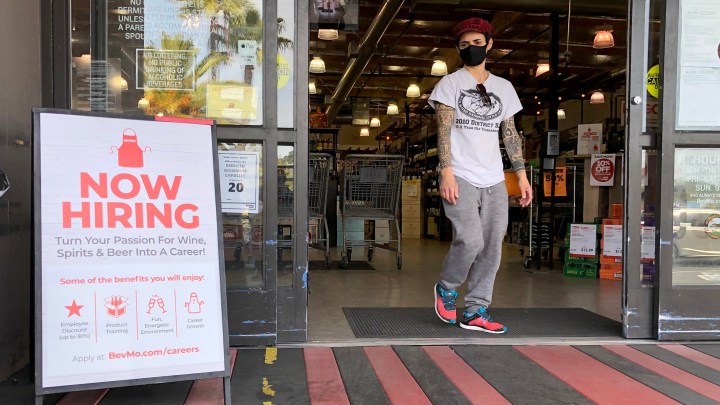 COPY
Despite near-record high job openings, workers of color or those without higher education are still at a disadvantage in the job market. Justin Sullivan/Getty Images
COVID & Unemployment

Despite near-record high job openings, workers of color or those without higher education are still at a disadvantage in the job market. Justin Sullivan/Getty Images
Listen Now

As of December 2021, 3.9% of the workforce was unemployed, according to the Bureau of Labor Statistics. That amounted to 6.3 million people — approximately 600,000 more than were unemployed before the pandemic hit in February 2020.

These are people who have actively searched for work within the past four weeks, according to the BLS definition of “unemployed.” And they’re looking for jobs at a time of near record-high job openings, strong job postings across a wide range of occupations and employers raising wages and benefits in a desperate bid to attract and retain workers. All of which signals that this is a really good market for job-seekers.

Who’s looking for work in this economy?

One group of unemployed people will always be with us from basic labor-market churn: People losing and leaving jobs, because of slack business, downsizing or a corporate change of direction.

That’s what just landed on 44-year-old Mary Higbe of Plano, Texas. In late January, she lost the marketing and communications job she’d held for more than three years. “The choice was made for me,” she said, “and it was definitely sudden.”

Higbe has more than 20 years of experience in her field and was making six figures. She’s not used to being unemployed. “I did take a couple of days,” she said. “And I don’t want to say, ‘licked my wounds.’ I wasn’t around having a pity party. But kind of wrapping my head around, what am I looking for?”

Then she hit her contact list and LinkedIn. She’s confident her skills are in high demand and she’ll find something soon at the same pay or higher, locally or nationally. “I don’t feel it’ll be that difficult,” Higbe said. “Companies have seen that remote work really can work, and they’re not limiting their talent pools by only looking within their city.”

But getting reemployed can be difficult for workers in sectors hard hit by the pandemic. Take, for example, leisure and hospitality, which had 1.2 million fewer payroll jobs in December 2021 than in February 2020, and lags many other sectors in job postings.

That’s been hard on 37-year-old Tristan Haas. “I’ve been in the hospitality industry my entire career,” Haas said. “Restaurants, cafes and — for the last almost 16 years — hotels.”

Haas was managing a hotel in Washington, D.C. until it shut down at the beginning of the pandemic. He went on unemployment, then got a job opening a new hotel in Atlanta. In September of last year, he lost that job. So far, he hasn’t been able to get unemployment benefits this time around.

He’s been applying for hospitality jobs locally with no luck so far. Haas is not willing to expand his search nationally, at least for now. His family has moved three times in the last five years for his work, and he said that’s been the norm in the industry. Until now.

“If you want a job or you want to move up, you have to move around,” he said. “And employees are saying, ‘Hmm, I don’t really want to.’ You know, I’m not opposed to moving, eventually, but it would be nice to stay in one place for more than three years.”

Haas has gotten some interest in his resume from senior living centers, but they’re offering a lot less money. “I’m OK with some pay cut, it’s not the end of the world to me,” he said. “But it’s a stressful, stressful time, not having benefits, not having health care.”

With headline unemployment at 3.9% — near the low it hit before the pandemic — it might seem like the best of times for anyone who wants a job.

But that rosy scenario masks heightened difficulties, according to William Rodgers, director of the Institute for Economic Equity at the Federal Reserve Bank of St. Louis. “If you look at adults who have no more than a high school degree, the share of them who are working has not returned to its pre-pandemic level,” Rodgers said. “Blacks, Latinos, young people, people with disabilities. The Black unemployment rate is twice that of the white unemployment, even in good times.”

Alongside the 6.3 million people who are unemployed right now, millions of others who were working before the pandemic have dropped out of the labor force.

Many of them are providing family care in the time of COVID-19.

Derek Bondurant, 41, was teaching high school in Portland, Oregon, until the pandemic. His wife works remotely for a nonprofit and they have a 3-year-old son, Benny. “Now I’m at home and trying to keep the kid quiet enough so she can do calls,” he said. “I also coach a lot of Ultimate Frisbee. It’s great because it gets me out of the house.”

This was not the plan. “We were always both going to be working as much as possible and then use that money to pay for child care,” Bondurant said. “And I certainly never anticipated that I would be home with a really young child as a stay-at-home dad.”

There is a teacher shortage, so jobs are available. But there’s also COVID-19. “If I was able to get a teaching job and we were able to find someone that was able to come in and take care of Benny,” Bondurant said. “What happens if they get exposed, then how would we substitute for them? Which one of us would have to take time off? Would it be me, brand new at a new job?”

For now, he’s one more potential worker, derailed by the pandemic, boosting the ranks of the not-employed. 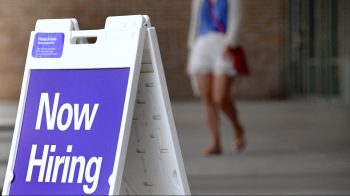