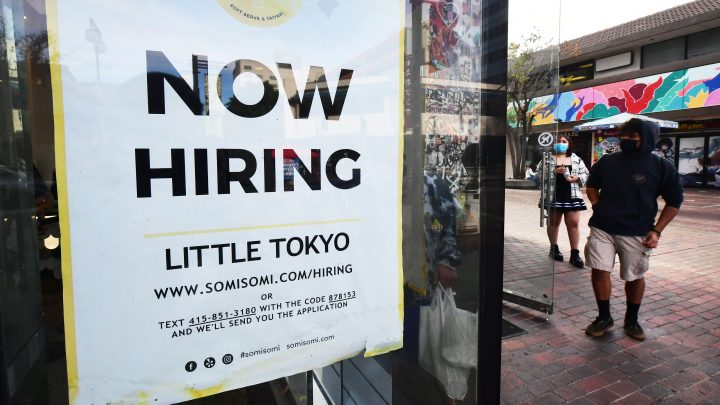 COPY
The Bureau of Labor Statistics' latest JOLTS report indicates that the labor market may be cooling off, just a bit. Frederic J. Brown/AFP via Getty Images

The Bureau of Labor Statistics' latest JOLTS report indicates that the labor market may be cooling off, just a bit. Frederic J. Brown/AFP via Getty Images
Listen Now

The Bureau of Labor Statistics counted a slight decline in the number of job openings at the end of June. According to its latest JOLTS report, approximately 10.7 million jobs in the U.S. were open at the end of June, down by 0.3% from the month before.

There are a few possible reasons for the decrease: employers retained more of their current workforce and were also able to fill those jobs, or gave up filling them. Retail saw one of the biggest declines in the number of openings. Could this mean the red-hot labor market is turning slightly pinkish?

Kathleen Donahue, the owner of the Labyrinth Games & Puzzles store in Washington, D.C., says having people in the store to actually play the games they sell leads to higher sales. But she’s also paying more for inventory like LEGO and Magic: The Gathering, and increasing wages.

“That’s been incredibly challenging—trying to figure out how to pay people to keep up with inflation while we’re being hit with inflation,” said Donahue.

“It’s a pretty tough position to hire for,” she said. “Because there’s not a huge Venn diagram overlap of personable people and gamers.

But she just filled her last open position, and overall, the job openings rate in retail dropped by almost 2% in June.

Stephen Juneau, a senior economist with Bank of America, says that while this decrease in openings could be a sign the job market is cooling a tiny bit, the overall labor market is still hot.

He also points out that a strong labor market has kept inflation high. In order to bring it down, along with the cost of Magic: The Gathering, the number of job openings needs to come down.