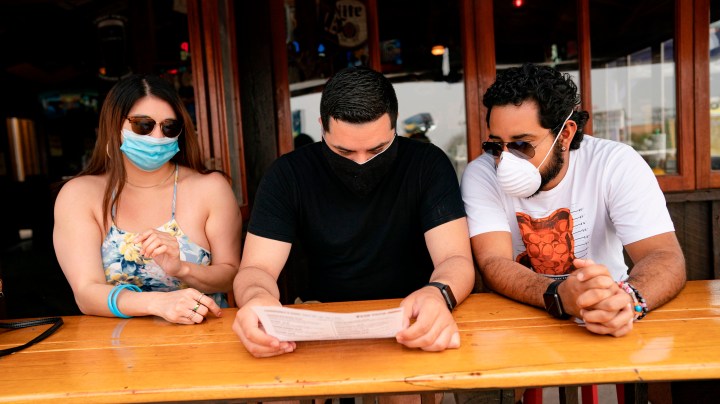 To fight inflation, restaurants get creative with menus, portions

COPY
To avoid raising prices, some restaurants rearrange menus to hide dishes with the lowest profit margins. Sometimes the plate gets a little lighter. Alex Edelman/AFP via Getty Images

To fight inflation, restaurants get creative with menus, portions

To avoid raising prices, some restaurants rearrange menus to hide dishes with the lowest profit margins. Sometimes the plate gets a little lighter. Alex Edelman/AFP via Getty Images
Listen Now

If you’ve been noticing prices going up at the grocery store, you can imagine the price of food is going up for restaurant owners, too. So is the cost of supplies … and of labor. So what’s a business owner to do?

Jeremy Merrin has raised prices at his Cuban restaurant, Havana Central, 10% to 15% since the beginning of the pandemic, and it’s still not covering the increase in his food costs. But he’s hesitant to raise prices more.

“I’m selling rice and beans. You know, I’m not selling expensive, fancy stuff. So there is a limit.”

So he’s cut the menu at his New York and New Jersey locations in half, which requires less labor and wastes less food. More intricate plates like paella and mofongo were the first to go. It’s a tricky balance; some customers have noticed.

“Because we have people who, you know, we have a lot of regular guests and a lot of them come in and they order the same thing over and over again,” Merrin said.

People are really sensitive to change, especially when it comes to price. According to Doug Roth, a restaurant consultant in Chicago, the more affordable a restaurant is, the more attuned to pricing customers are.

“I would say casual, lower end, you have to be very careful,” he said.

So, some businesses shrink portions. Domino’s, for instance, announced that it’s changing its $7.99 chicken wing deal from 10 pieces to eight. Shrinkflation can turn off many customers, though, according to Rick Camac at the Institute of Culinary Education.

“If they don’t have 1½ times what they can eat, they feel like they’re being ripped off,” he said.

A more common strategy is not redoing or repricing menus but rearranging them, Camac added — and hiding dishes with the lowest profit margins.

“If I don’t want you to buy a certain item, but I want it on the menu — maybe for price value, to make it look like it’s a value-sensitive menu — I’m going to bury it in the middle of a column,” he said.

There are also those sneaky add-ons. That burger always looks reasonable until you realize you have to add an extra $1.50 for cheese.