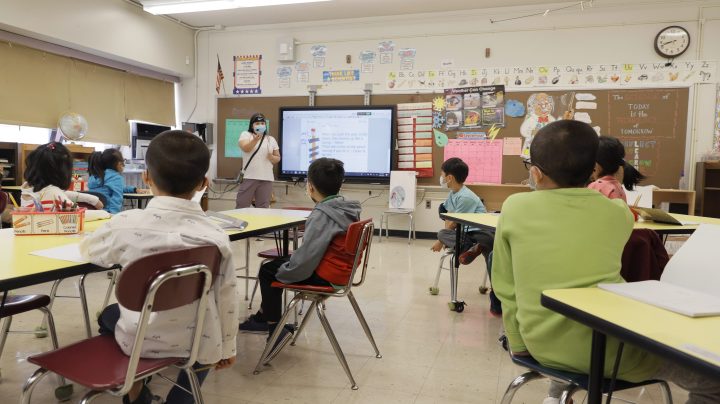 American schools have a lot of money to spend right now. They received $122 billion dollars last spring from the American Rescue Plan, the largest ever one-time investment of money by the federal government in public education. The money can go towards buying COVID-19 tests, hiring counselors, repairing air filtration systems, or anything else that could get students through the pandemic. Schools have until September 2024 to spend the money.

But, according to a letter to Secretary of Education Miguel Cardona from a coalition of school associations, networks and campaign groups, they need more time.

One of the schools that would like an extension is Claremont School, in New York’s Hudson River Valley. It’s in Ossining school district, which received $10 million from the American Rescue Plan.

“There was a wow factor, and a sincere gratitude,” said Ray Sanchez, the Ossining school district superintendent, about receiving the money. “Then there’s a heavy responsibility associated with it.”

Sanchez wants to use some of the funds to replace unit ventilators in the schools. They’re used for air flow, and to heat the classrooms. The one in fourth-grade teacher Stephanie Altobelli’s classroom has been in place since the school was built more than 60 years ago, and looks its age. Altobelli said it sometimes blows out really cold air.

“But then, at other times, it blasts out really hot heat. And it kind of fluctuates throughout the day,” she said.

Altobelli has a few of the windows cracked, even though it’s 17 degrees out, to encourage air flow. Many of the students wear jackets. In the summer, she said, it can get really hot.

“Sometimes kids don’t come in when it’s nearing 100, because their parents just keep them home. It’s very hot, it’s miserable,” said Altobelli. “They’re sweating and we do as best we can to get them drinks of water. We keep the lights off. But just 24 bodies in one space brings a lot of heat.”

The new unit ventilators would also provide air conditioning. While there’s enough money from the American Rescue Plan to replace them, school leaders say they need more time to get capital projects like these done.

“We all work within bureaucracies,” said Shari Camhi, the incoming president of the School Superintendents Association, one of the groups behind the letter to Secretary Cardona. She’s also superintendent of her own district on Long Island.

“There are a lot of hoops that we have to jump through in order to lawfully do capital work in our school districts,” Camhi said.

Things like drawing up architectural plans, getting approval from the state and soliciting bids from contractors can take a long time.

In addition to repairing HVAC systems, Camhi said these federal funds also provide an opportunity to modernize schools themselves and better prepare students for the workforce. One of her own buildings is 108 years old.

“Think about what industry was like 108 years ago; it was an industrial model. People worked in assembly lines, they worked in individual spaces. But when you think about Google, or you think about WeWork, those industries, they are not designed that way,” Camhi said.

But the American Rescue Plan wasn’t designed to address the future, exactly. It’s more about getting through the present, and helping students recover from the pandemic.

“If in the end, this large federal investment doesn’t do its job of getting kids back on track, then I think the history books will write that it’s a failure,” said Marguerite Roza, director of the Edunomics Lab at Georgetown University.

Right now, if schools don’t spend the money by the deadline, it’ll go back to the federal government.