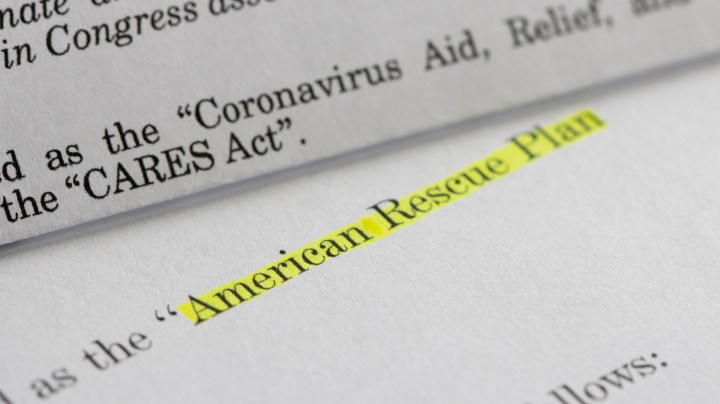 COPY
The American Rescue Plan includes $20 billion for tribal governments. But hitches in the aid provided by the CARES Act in 2020 prevented full and effective use of the funds. hapabapa via Getty Images
COVID-19

The American Rescue Plan includes $20 billion for tribal governments. But hitches in the aid provided by the CARES Act in 2020 prevented full and effective use of the funds. hapabapa via Getty Images
Listen Now

Leaders of the Eastern Shoshone Tribe in Wyoming are used to carefully planning for every dollar that comes their way. But last year, it was hard to plan for the aid they received under the Coronavirus Aid, Relief and Economic Security Act.

“The money came at us quick, and it was a flurry,” said Karen Snyder, the tribe’s pandemic response coordinator.

Starting in late spring 2020, Snyder said, the tribe received close to $14 million in badly needed CARES Act aid. But a Dec. 30 spending deadline gave the tribe just six months to put it to use.

“I just don’t think that deadline was ever realistic, nor was it conducive to us doing good planning,” Snyder said.

Close to half of the money was paid directly to tribal citizens as hardship aid. And the tribe prepaid for materials and labor contracts to weatherize 200 elders’ homes ahead of the deadline.

Then, just days before that deadline, Congress extended it to the end of 2021.

“It was very counterproductive for them to wait until the final hour, I mean to us, out in Indian Country, who were sweating bullets,” Snyder said.

President Joe Biden’s American Rescue Plan, or ARPA, includes $20 billion for tribal governments — an unprecedented amount of aid. It gives tribes through 2024 to spend the funds.

“To me, that’s one of the most important differences between the CARES Act and ARPA,” said Eric Henson, a researcher with Harvard University’s Project on American Indian Economic Development.

He said that timeline allows for spending on what tribal communities really need: improvements to health care, housing and water infrastructure. “Because that’s the platform on which you can lift yourself up going forward,” Henson said.

But it’s not yet completely clear what’s allowed. And last year, Henson said, tribes received little guidance about spending decisions. He co-authored a policy brief calling for the U.S. Treasury Department to allow for broad spending and to provide more technical support to tribal leaders as they spend the aid.

“A tribe might ask, ‘Hey, we’re going to invest some of these dollars in our water infrastructure, but we need to greatly enhance the electrification around it all to ensure the water and sewer works. Is that OK?'” Henson said. “Treasury should have a team of people in place who are equipped to field an inquiry like that pretty quickly.”

There was another problem with last year’s CARES Act: the allocation formula used to divide the money. Some tribes argued it relied on flawed federal data about each tribe’s population, causing them to lose out on millions in aid. Some successfully sued the federal government for their fair shares.

This time around, Snyder said she’s relieved that the allocation formula will use self-reported tribal population numbers.

“This is the biggest injection of funding into Indian Country that’s probably going to ever happen in my lifetime,” she said.

If the disbursement is done correctly, she said, the money will be transformative.