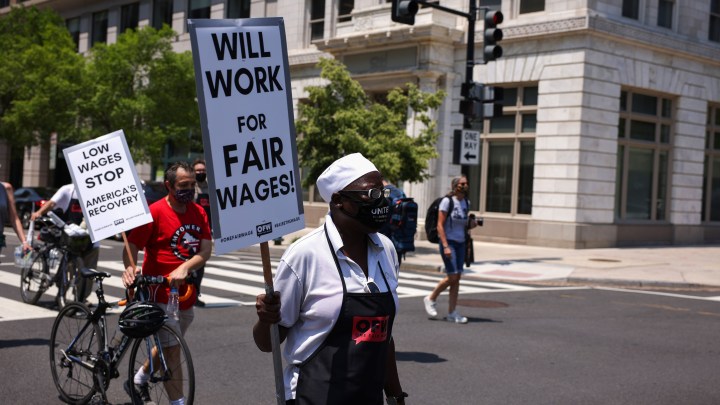 A record number of states and cities are raising their minimum wage this year, according to a tally from the National Employment Law Project. Some of the increases went into effect on Jan. 1. Others kick in later in the year.

In two states and 31 cities and counties, the minimum wage will be at or above $15 an hour. So how much of a difference does a higher minimum wage make for a worker?

Fifty-two-year-old Cocobe Tirore has worked as a server at a Baltimore hotel since last June. She makes $11 an hour, plus tips. But sometimes the dining room is empty. And Tirore will lose her job in March when the hotel closes. Plus, she’s behind on her rent.

She’s two months behind. Tirore said she was able to pay her bills when she worked at a different hotel, making $15 an hour. She even managed to send one of her two sons to college, but he had to drop out when she lost that job.

“Yeah — now he started looking for a job too,” she said.

A higher minimum wage helps workers like Tirore negotiate better pay, according to Tsedeye Gebreselassie, an attorney with the National Employment Law Project.

“The minimum wage sets a wage floor,” she said.

Maryland’s minimum wage is set to hit $15 an hour for companies with 15 or more employees by 2025.