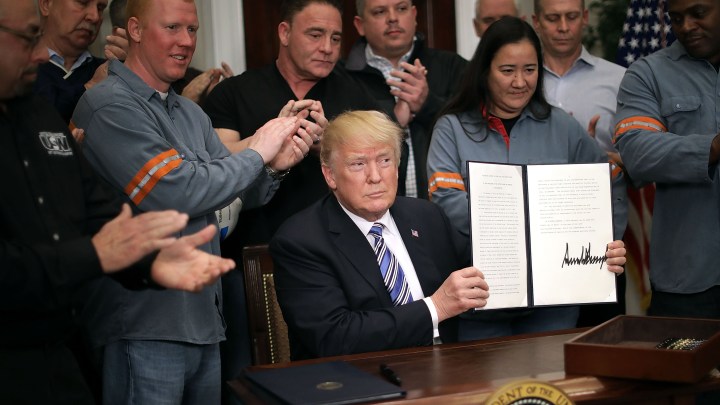 COPY
Then-President Donald Trump poses with the 2018 steel import proclamation, which added a 25% tariff on imported steel. President Joe Biden has lifted the tariff for countries in the European Union but not for the United Kingdom. Chip Somodevilla/Getty Images

Then-President Donald Trump poses with the 2018 steel import proclamation, which added a 25% tariff on imported steel. President Joe Biden has lifted the tariff for countries in the European Union but not for the United Kingdom. Chip Somodevilla/Getty Images
Listen Now

Back in 2018, President Donald Trump imposed a 25% tariff on steel and aluminum imports from a range of countries in a bid to protect American jobs. The move was bitterly criticized as blatant protectionism by the countries affected and especially by America’s European allies.

In an effort to repair trans-Atlantic relations, President Joe Biden lifted the duties against the European Union in a deal struck at the end of October. But since the United Kingdom is no longer part of the EU, it wasn’t included in the deal, and Biden has proved reluctant to reach a separate agreement with the Brits.

In a joint statement on Wednesday, both governments announced that they will launch fresh talks to resolve the issue, but no date or timetable has been set for those talks.

His reasons may have something to do with Brexit.

British steelmakers, meanwhile, are frustrated about the disadvantage they’re now operating under compared with their European competitors.

James Brand is the managing director of United Cast Bars at his foundry in Chesterfield in the north of England. While business is buoyant at the moment, he said his company now faces a headwind in its trade with the United States— a barrier that European steelmakers no longer encounter.

“The U.K. is still saddled with the 25% duty, and since the agreement was put in place with Europe, there’s going to be a certain amount of material that can come from Europe into the U.S. duty free,” Brand said.

That automatically makes his British products as much as 25% more expensive than his European peers. Brand’s company won’t suffer overall; it has a subsidiary inside the bloc in Spain and is now planning to supply its American customers from that foundry.

But this is a setback for the U.K. side of the business.

“It’s a few hundred tons of material that won’t be made in this foundry,” Brand said. “It’ll be made in our sister company in northern Spain. There is a loss of that turnover and that volume of sales from the U.K. factory,” he said.

The fact that the U.S. tariff has not been lifted from the Brits compounds a major problem for the British industry, said Chrysa Glystra of the UK Steel trade association.

“The tariff has been hugely damaging to U.K. steelmakers. Exports have halved compared with 2017,” she said, adding that the U.S. is the U.K.’s second largest export market for steel.

It’s also a highly lucrative one, making the collapse in sales to the U.S. even more damaging.

Glystra also pointed out that the agreement between the EU and the U.S. has inflicted another blow on the U.K.: “We can no longer export semifinished products to the EU to be processed in the EU and then exported to the U.S. So this hits our trade with the EU, as well.”

Both the U.K. and the EU negotiated hard for the tariffs to be lifted as soon as Biden took over the presidency. The reason that the EU has been successful and the U.K., so far, has not, isn’t hard to fathom, according to trade experts.

“The EU has just got a lot more clout and goodwill in the United States,” said Peter Holmes of the U.K. Trade Policy Observatory at Sussex University. “The U.S. has apparently decided that the EU would be an effective partner in the U.S. rivalry with China, and the U.K. doesn’t have a lot to deliver to the U.S. in that context. The United States is not in a particular mood to do favors for the British government.”

Far from it, due to one of the running sores left by the U.K.’s rupture with the EU. Holmes said the deeply pro-Irish Biden has sided with the EU in a post-Brexit spat with the U.K. over the Irish border. And, Holmes said, the White House isn’t going to give up an important bargaining chip without some British concessions on that issue.

“If it removes the tariffs, then it’s lost a stick to beat the U.K. with,” he said.

Brexiteers are fuming. John Longworth, a businessman and former member of the European Parliament for the Brexit Party, is particularly incensed.

“It’s almost as if the United States has taken the decision to punish one of its greatest allies,” he said. “Frankly, it’s bizarre.”

Longworth insisted that the Irish border issue is irrelevant to the question of U.S.-U.K. trade, and he accused the United States of meddling in the U.K.’s democratic decision to leave the European Union.

“It’s a very strange situation that we have the United States preaching about democracy and yet they are undermining and ignoring the democratic will of the people of the United Kingdom,“ he said.

The British government has not been anything like as forthright in its public comments on the U.S. refusal to lift the sanctions on U.K. steel.

Prime Minister Boris Johnson’s administration is eager to maintain a cordial relationship with the Biden White House in the hope that it may one day deliver a free trade agreement with the U.S. That would be a glittering prize and a powerful vindication for Brexit, but the chances of such an agreement seem remote.

“Since the arrival of the Biden administration, the political closeness of the U.K. and the U.S. is much diminished,” observed trade expert Holmes — and that closeness could soon be diminished further thanks to the steel tariffs.

The fact that talks between the two governments have been agreed over the steel and aluminum tariffs offers some hope of a breakthrough, but with the Irish border issues still unresolved, the outcome is uncertain.

Back in Chesterfield, foundry boss James Brand doesn’t want to get caught up in the row about Brexit. For the U.S., he has a simple message: “Please, receive us at the table and listen favorably to what we’ve got to say. Let’s get us on to the same level playing field.”

It is a matter of some urgency. If the U.S. tariffs are not lifted fairly soon, Brand warned that more British steel production may shift to continental Europe and never return to the U.K.