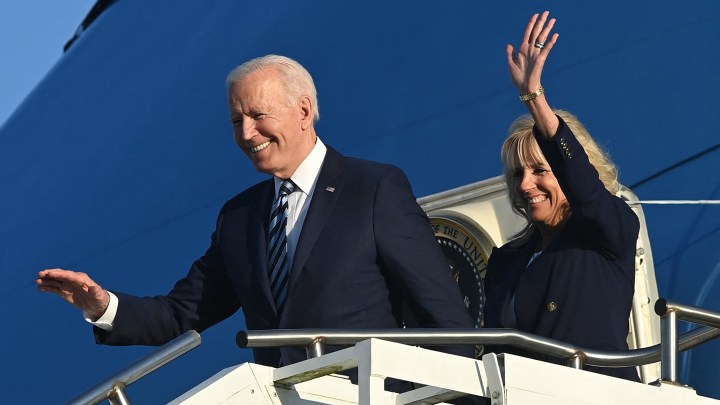 COPY
The first couple arrives in England ahead of the G-7 summit. Biden is expected to try to resolve disputes involving tariffs on wine, cheese, steel and aluminum. Brendan Smialowski/AFP via Getty Images

The first couple arrives in England ahead of the G-7 summit. Biden is expected to try to resolve disputes involving tariffs on wine, cheese, steel and aluminum. Brendan Smialowski/AFP via Getty Images
Listen Now

President Joe Biden arrived in Europe on Wednesday, kicking off a weeklong series of meetings. One item that’s high on his agenda: trade.

Specifically, the tariffs levied by the U.S. and the European Union. (Yes, those are still a thing, and U.S. consumers are still paying for them.) Biden and EU leaders are expected to discuss a path to ending their trade battles.

If you’re fond of provolone or a fan of Bordeaux, then you’ve felt the sting of tariffs.

“I will confess that we purchase a lot of wine and cheese in our household,” said Lynn Fischer Fox, a partner and trade lawyer at the law firm of Arnold & Porter. She’s been following the dispute over Europe’s subsidies for Airbus and U.S. support for Boeing, which resulted in 25% tariffs on certain European products — like wine and cheese — and EU tariffs on U.S. goods.

“And these huge volumes on really important products for both likely caused political pressure,” she said.

The two sides have already agreed to suspend these tariffs until July. Now, the EU is calling on Biden to work toward resolving the aircraft dispute during a meeting next week. But don’t uncork that French Champagne yet. They’re also bickering over U.S. tariffs on steel and aluminum.

“All steel and aluminum coming in from the EU is being assessed a 25% tariff on steel and a 10% tariff on aluminum,” said Jennifer Hillman, a senior fellow at the Council on Foreign Relations.

Hillman said there’s talk of a self-imposed Dec. 1 deadline for resolution of the steel and aluminum dispute. Wendy Cutler, vice president of the Asia Society Policy Institute, said even a little nudge from Biden would be significant.

“As a former trade negotiator, when the president of the United States says, ‘Do all you can to resolve a dispute,’ the pressure’s on to find a solution,” she said.

Otherwise, those tariffs on EU products that were suspended will snap back — and you’ll pay even more for your Bordeaux and provolone.