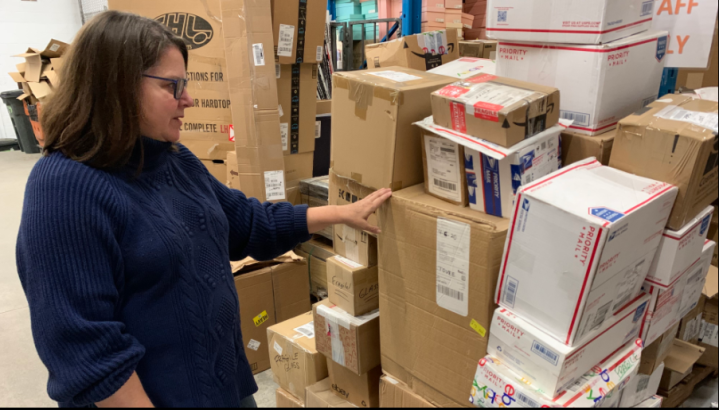 COPY
Betsy Smith is the owner of NAC Logistics in Ogdensburg, New York. Her father started the business in 1957. Lily Jamali

Betsy Smith is the owner of NAC Logistics in Ogdensburg, New York. Her father started the business in 1957. Lily Jamali
Listen Now

The first thing you notice when you walk into NAC Logistics are the boxes. There are tens of thousands of them, stacked several feet high.

“The front part of our warehouse is where all the small packages come in for the Canadian individual consumers and as you can tell, we’re overfull,” said owner Betsy Smith.

The pandemic almost destroyed this business, which Smith’s dad started in 1957. These days, the company charges $5 for each package they hold.

Smith was barely able to stay afloat with the help of two federal pandemic assistance loans and two draws on the Paycheck Protection Program.

NAC Logistics is one of many businesses on the American side of the United States-Canada border that receive and hold packages for Canadians, who can save big bucks on taxes and shipping costs by picking up goods in the U.S. This industry suffered when the border closed due to the pandemic.

This month, the Biden administration has started allowing Canadians to drive into the U.S. for the first time in almost two years. But the open border hasn’t brought back the crowds that businesses like hers have been hoping for. Smith has had only a trickle of customers so far.

In a corner of the warehouse, Heidi Von Huene uses an Exacto knife to cut open one of 70 boxes addressed to her here. She drove over the border early from Cardinal, Ontario, where she runs Heidi’s Kitty Haven, a cat rescue shelter. Some of her packages were delivered as far back as April 2020.

“We had three litter boxes, a cat tree and a thing to put the cats in the car with,” Von Huene said.

In fact, a recently rescued kitten is watching from a crate as Von Huene does her inventory. Von Huene breaks to feed her some formula — yet another of the deliveries she’s picking up today.

Experts say getting Canadians back to the U.S. side could take a while.

“When we had the disruption of the border after 9/11, it took about three years for tourism and cross-border shopping and visits across the border to reach the pre-9/11 level,” said Christopher Sands, director of the Wilson Center’s Canada Institute.

Even now, with the border open, Canada has required citizens to show a recent negative molecular COVID test to return home. Those tests cost up to $250 each.

But Canada is now set to lift its testing requirement for Canadians who take trips shorter than 72 hours, giving package businesses on the U.S. side of the border hope that more Canadians will return.