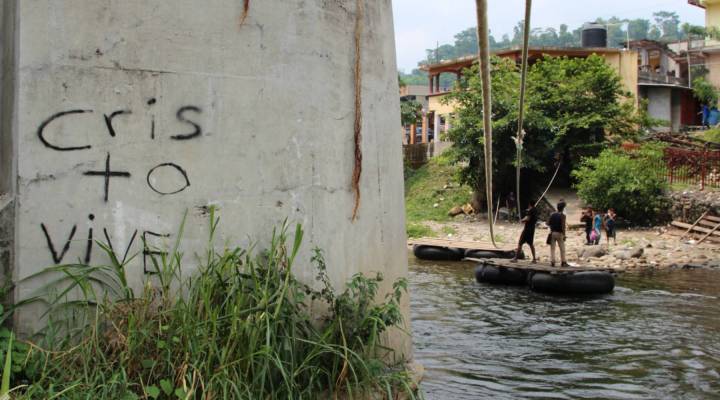 COPY
The words read "Christ Lives." Migrants and goods such as oil and foodstuffs are transported illegally on a raft below a bridge that is an official port of entry between Mexico and Guatemala. Lorne Matalon

The words read "Christ Lives." Migrants and goods such as oil and foodstuffs are transported illegally on a raft below a bridge that is an official port of entry between Mexico and Guatemala. Lorne Matalon
Listen Now

There’s a black market that thrives every day in the very shadow of the legal border crossings that link Mexico and Guatemala — to the chagrin of the United States. After the unaccompanied minors crisis in 2014, when thousands of Central American children arrived on the U.S. border after transiting Mexico, the U.S. started spending millions of dollars to help Mexico secure its very porous southern border with Guatemala.

But little has changed on a large section of the Guatemala-Mexico border marked by the Rio Suchiate, historically a transit point for goods and people in either direction.

Here, dawn on the river ushers in a different kind of workday commute. One-hundred-pound bags of Mexican corn are stacked on a wood palette that sits on top of a huge inner tube. People flock to the river with goods they bought the night before in Mexico. Their destination is Guatemala. At the same time, migrants come from Guatemala and enter Mexico clandestinely. All this takes place as Mexico has been urged by the United States to seal this river with its untold volumes of unregistered trade.

Hundreds of bags of corn kernels are delivered daily from southern Mexico to northern Guatemala on the Rio Suchiate at Ciudad Hidalgo, opposite Tecun Uman, Guatemala. Merchandise is ferried across, unregistered, and authorities from both countries at a bridge that marks the legal border crossing 200 yards away turn a blind eye.

“I just live better over here, more freely, free, living in Mexico,” said a Salvadoran man, who did not wish to be identified.  He said he had built a new life here, moving goods, people and packages whose contents he neither knew nor was concerned about from one side of the river to the other.

In a country where the truth is often elusive and opaque, it is widely believed the idea of Mexico actually sealing the border is a platitude — words — because the political will just isn’t there.

“The reason they don’t do anything is because police and the authorities make money also, because they get a cut of the action, so they don’t make any move to stop anyone,” said Leonardo Perez, a Mexican who lives near the border.

Many people make a living on the passage of migrants through southern Mexico. Money changers line both sides of the border at Talisman, Mexico-El Carmen, Guatemala.

Everyone takes advantage of people crossing here, said Jordan Matus, an accountant at a migrant shelter. He said there are too many fingers in the pie to stop anything. He’s not alone.

“Migration has become a business for the people who live around the borders,” said Carla Samudio, a friend of Matus’ who is Honduran with legal status in Mexico ”They know that they arrive with money. And they take money from them.”

Market dynamics are also driving trade. The spread between the Mexican peso and the Guatemalan quetzal means Mexico’s a bargain for Guatemalans. After shopping in Mexico, they ask rhetorically, why bother with customs forms and declarations when you can cross undetected?

Check out more of Lorne Matalon’s reporting on the Mexico-Guatemala border here.