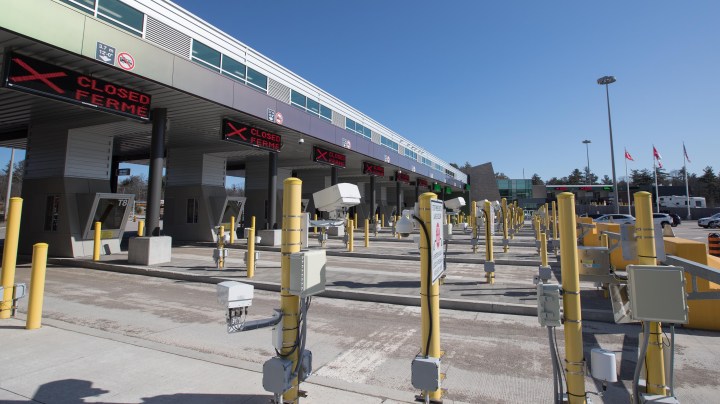 COPY
The gates at an Ontario, Canada, crossing site are closed, but the border could reopen as soon as mid-August. Lars Hagberg/AFP via Getty Images

The gates at an Ontario, Canada, crossing site are closed, but the border could reopen as soon as mid-August. Lars Hagberg/AFP via Getty Images
Listen Now

If your post-lockdown travel bucket list has you heading north — maybe for poutine in Montreal or the ski slopes in Whistler — Canadian Prime Minister Justin Trudeau has some good news for you.

The U.S.-Canada border has been closed since March 2020 and could reopen by mid-August. That’s if Canada’s vaccination rate continues to improve (remember, they’re doing much better than us). It’s been a tough year and a half for Canadian border towns dependent on U.S. tourists.

Andrew Duffy co-owns two inns and a motel on the Canadian side of Niagara Falls. A proud Canadian, he’s a big fan of the Fourth of July, which this year was a bummer.

It was “very, very, very quiet and with no Americans to speak of, only Canadians who were sort of hanging on to their July 1 weekend,” he said.

July 1 is Canada’s Independence Day, which Duffy got some business from. But U.S. travelers made up more than half of his summer guests before the pandemic. Now, all that money stays at American hotels.

“They have certainly eaten the lunch we might have seen in those key months,” he said.

Adding insult to Duffy’s injured bottom line, Canadians can fly to San Diego or New York — and 27 other countries.

“That’s good news for Canadians, but it’s also, it creates a bit of an unlevel playing field,” said Beth Potter, the president of the Tourism Industry Association of Canada.

But many Canadians are perfectly happy to keep that border closed, especially with COVID cases rising in the U.S.

Canada is finalizing plans that would require Americans to show proof of vaccination before crossing the border, although the details of how that would work are still being ironed out.