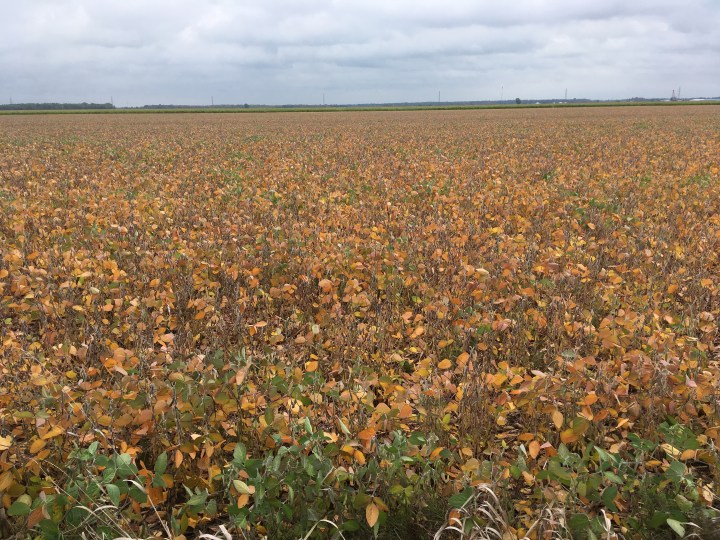 COPY
Soybeans growing on a farm in Canada. Emma Jacobs/Marketplace

Meng Wanzhou, the CFO of the Chinese tech giant Huawei, is fighting her extradition to the United States on charges related to the company’s business dealings in Iran.

“The marketplace will not give us what we need to cover our costs of production,” said Haerle, chair of the Grain Farmers of Ontario. He has about 1,500 acres planted with rows of soybean plants on his farm in St. Isidor in eastern Ontario.

Canada “has not sent a bulk shipment to China since the end of 2018,” said Ron Davidson of the trade association Soy Canada. That he says, is contributing to a slump in prices even while production costs have risen this year.

Shipments of other Canadian crops to China have also slowed or stopped – including canola, beef and pork. In the case of canola, China blamed pest contamination. There has been no official explanation for the drop in soybean sales.

Sarah Pittman, policy analyst at the Canada West Foundation, says the overall picture looks very much like retaliation for Meng’s continued house arrest. “We don’t have a smoking gun but have lot of circumstantial evidence,” Pittman said.

Meanwhile, China’s trade war with the United States means Canada faces competition from American crops in other markets like Europe.

The canola industry could take a financial hit of about a billion dollars, according to Brian Innes, vice president of the Canola Council of Canada.

He said the uncertainty the trade situation creates for Canadian farmers means they don’t know what supplies to order for next year.